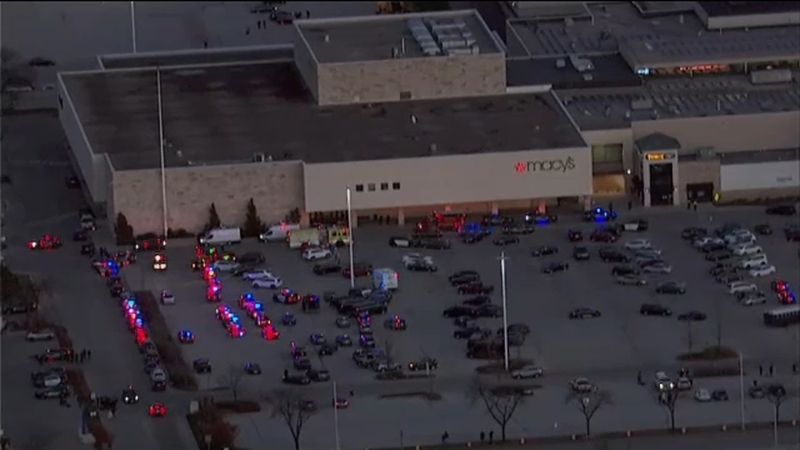 WAUWATOSA, Wis. (WLS) -- Police have arrested a 15-year-old for the shooting at a Wisconsin mall that injured eight people Friday.

Police arrested a 15-year-old in connection to the Mayfair Mall shooting that injured 8 in Wauwatosa, Wisconsin Friday.

Chief Barry Weber gave no motive for the attack at the Mayfair Mall during a briefing Friday evening. He said the shooter had left the scene before officers arrived, and that extent of the victims' injuries was unknown.

"Preliminary statements from witnesses indicate that the shooter is a white male in his 20s or 30s," Weber told reporters. "Investigators are working on determining the identity of that suspect."

Police also said the shooting apparently stemmed from an altercation and was not a random act. Four of the injured are described as innocent bystanders, police said.

Wauwatosa Police Department Sergeant Abby Pavlik added that several arrests have been made and police continue their investigation.

Authorities said the mall was closed Saturday but has since reopened for business.

Police issued a statement Sunday regarding the investigation:

"The Wauwatosa Police Department is pleased to announce the arrest of a 15 year old Hispanic male in connection with the shooting at Mayfair Mall. The suspected firearm used in this incident was recovered at the scene of the arrest.
Around 2:49pm, officers were notified of shots fired inside the Mall, near lower level Macy's. Officers were on scene, providing medical aid to victims within 30 seconds of notification.
An officer's first priority in this situation is to secure the immediate scene and begin rendering first aid. During this time, the shooter exited the mall as other patrons were running out.
Unaware that the shooter had left the Mall, a perimeter was established and tactical teams formed to begin clearing the mall of patrons sheltering in place as well as searching for the suspect. The process to completely secure the mall, which contains 1.265 million square feet, took approximately six hours and involved seven tactical teams.
While tactical teams were securing the mall, investigators were interviewing victims and witnesses to aid in identification of the shooter.
Multiple leads were obtained during this time period which resulted in numerous hours of investigation. It is important to stress that these types of investigations not only require the identification of a suspect but preservation of evidence related to the crime. This presents a cautious balance of what to release to the public versus potential destruction of that evidence. Our initial investigation led us to believe that this was not random and therefore no immediate danger to the public existed. Photos of our suspect were not released to media for fear of compromising the investigation and potential destruction of evidence.
It is important to stress that this act of violence was not a random one but an altercation between two groups. As often happens in these types of situations, innocent bystanders are injured. There were four innocent bystanders that received non-life-threatening injuries during this incident. We extend our well wishes and prayers to them for a speedy recovery.

On behalf of the Wauwatosa Police Department I would like to thank the numerous agencies that assisted in this investigation.
The bravery, professionalism and service to community shown by all first responders was exemplary. As a result, the City of Wauwatosa and Mayfair Mall remain a safe community and shopping destination.
I would like express a special thanks to our officers, detectives, the FBI, Milwaukee Police Department and the City of Brookfield Police Department for their commitment and invaluable assistance.
I am so proud of the personnel in our police department. They have worked tirelessly to solve this case quickly. We have gotten support from so many agencies; Law enforcement here in Wauwatosa and all of SE Wisconsin continues to showcase the professionalism and capability that citizens have come to expect.
Mayfair Mall is a wonderful place to shop and is a safe place to be. Unfortunately, in our society, an incident of this type can happen at any time in any place. I encourage people to show their support for Mayfair, they have been wonderful partners to us at the police department for many years.
In closing, whenever a critical incident like this happens, we receive many inquiries from citizens and new media demanding more information and speculating why we aren't providing more. Understand, in almost every incident we have more information that we release, we cannot risk compromising the recovery of evidence, information or location of any suspects."