Here's when McDonald's is bringing back the Shamrock Shake 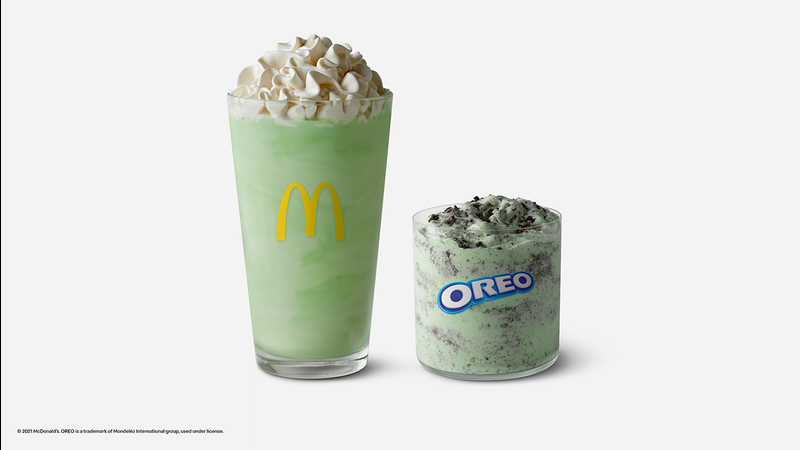 Here's when McDonald's is bringing back the Shamrock Shake

McDonald's is getting ready for spring with the arrival of the Shamrock Shake.

Beginning February 21, the fan-favorite milkshake -- as well as an Oreo Shamrock McFlurry -- will go on sale at US restaurants for a limited time. Prices vary by location.

This year, McDonald's is also releasing the official color code of the "unmistakable minty-green hue," which is #cbf2ac, so fans can celebrate accordingly. In years past, people have had green manicures and made other Shamrock-inspired gear using the green to flaunt the dessert on social media.

McDonald's first sold the Shamrock Shake in 1970. Over the years, the burger chain has brought back the original as well as variations like the "Shamrock Sundae" in 1980, a chocolate version in 2017 and the Oreo Shamrock McFlurry in 2020. The Shamrock Shake, originally sold regionally, went on sale nationally in 2012.

Fast food chains are constantly competing for customers' dollars and attention, and specialty offerings are a way to try to cut through the noise. Seasonal items are an important marketing tool for the food industry, according to Alexander Chernev, a professor of marketing at Northwestern University's Kellogg School of Management.

"When you have these exclusive products, which exist for a short period of time, it gives people a reason to come to the store," he previously told CNN Business.

McDonald's recently reported that sales at its US stores open at least 13 months jumped 13.8% - the largest annual increase since McDonald's started reporting comparable sales in 1993. Menu price increases and new and seasonal items, like the limited-time McRib, helped boost sales.