3 charged in murder of Brookfield man 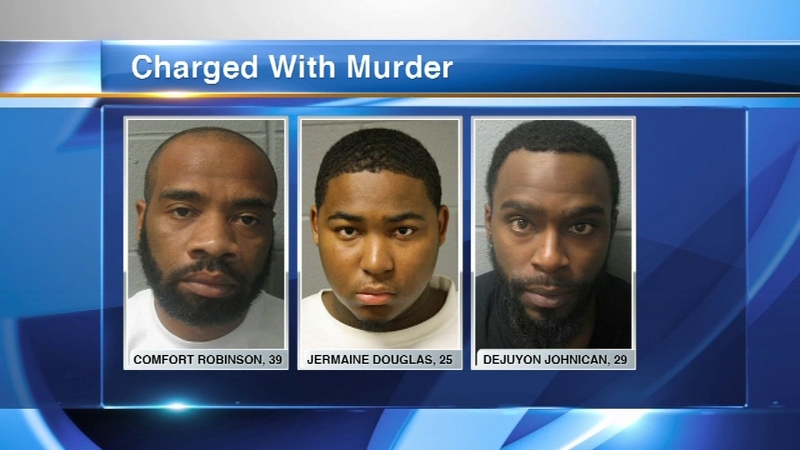 3 charged in murder of Brookfield man

BROOKFIELD, Ill. (WLS) -- After an almost year-long investigation, three people have been charged in the murder of Michael Smith, a security guard killed the day he was expected to testify in a criminal case.

Smith was shot in front of his home in January. His wife was inside and heard the shots. Police said the gunman, 25-year-old Jermaine Douglas, followed Smith to Brookfield after Smith appeared in court intending to testify against Douglas' friend in another case.

"The victim Michael Smith parked in front of his Brookfield residence before exiting his car, Douglas pulled up and fired multiple shots at Michael Smith at point-blank range," said Chief James Episcopo of the Brookfield Police Department.

Police said they believe that was Robinson's motive to kill Smith.

"Michael Smith was a good man, a model citizen, a hardworking family man, who was killed in the prime of his life for doing his job," said Episcopo.

Police had a warrant for Douglas' arrest last week, which led to a chase and a crash at West 87th Street and South Ashland Avenue on Chicago's South Side. Police said they found a loaded 50 caliber handgun on the scene.

Police said Smith's grateful widow and mother sent a gift basket to them Monday after the suspects appeared in court.

"It hurt for a long time and I know everybody will be happy that we came to a conclusion on it," said Episcopo.

Two of the suspects are being held on $250,000 bond, the third is held on no bond. All three are due in court next week.
Related topics:
brookfieldmurder
Copyright © 2022 WLS-TV. All Rights Reserved.
TOP STORIES
17 shot, 3 fatally, in Chicago weekend violence
Chicago weather forecast includes snow into Monday | Live radar
St. Charles library closes after threats over mask policy
Tax filing season starts Monday. What to expect for 2022
Tips on getting back to workout after battling COVID
After the omicron wave, what's next for the COVID pandemic?
Russia rejects UK claim of trying to replace Ukraine leader
Show More
Sunday Mass at Holy Name Cathedral
Chicago man charged in 2021 I-94 crash that killed boy, 4
Girl, 8, killed by stray bullet ID'd: ME
Kyle Rittenhouse faces new legal issues
Retired Chicago priest accused of sexually abusing minor 40 years ago
More TOP STORIES News