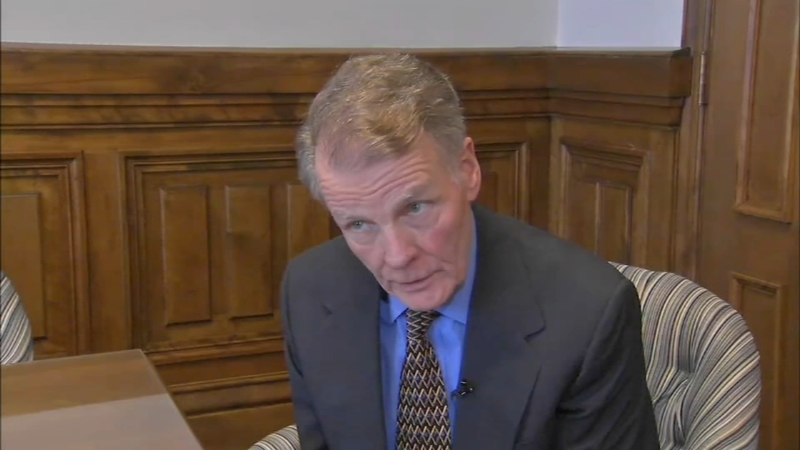 CHICAGO (WLS) -- Former Illinois House Speaker Michael Madigan's arraignment next week will be by telephone, despite objections from prosecutors who wanted an in person court hearing. Although this will be a lengthy legal war, the first skirmish is won by Madigan, who won't have to walk the media plank into court.

The 79-year-old faces a 22 count indictment on a wide range of charges.

The I-Team has learned there will be no "perp walk" for Madigan through the lobby of the federal courthouse.

Only the birds were chirping Thursday at Madigan's house. As he's done many times the past fifty years, when the temperature goes up, he cools down behind drawn blinds and a closed garage. Madigan's morning paper is outside his front stoop along with leftover Christmas decorations and a St. Patrick's Day door piece. Madigan won't have to leave for his first court hearing next Wednesday at the Dirksen Federal Building. Magistrate Judge Jeffrey Cole determined the arraignment will be by phone. Sources familiar with the matter say prosecutors wanted Madigan to actually appear; a time-honored walk through the lobby that some politicians have enjoyed, while others have not.

RELATED: Who the feds interviewed in Mike Madigan indictment

Madigan has already signaled his defense: that there is no law against giving constituents job recommendations.

"This is an incredibly cagey, careful man who insulated himself from direct corruption," former federal prosecutor Ron Safer told the I-Team.

Safer said Madigan will build out that defense in court.

"He's not pleading. They're not offering him anything that's going to make it worth his while," he said. "This case is going to go to trial."

"They will make the case that in politics, you do favors for friends. You know, I think that's going to be a hard sell to a jury," said University of Chicago Institute of Politics Director David Axelrod.

Back at Madigan's compound, a familiar sign directs package deliveries to Democratic Ward headquarters a few blocks away. Even though Madigan is apparently home, he's not seen, or tries not to be, as the I-Team found in 2013 when he drove away from our questions; and then hid out in his office until he cunningly cut out a back door. Then, though, it was just politics.

Now, Madigan is beginning a fight for his freedom.