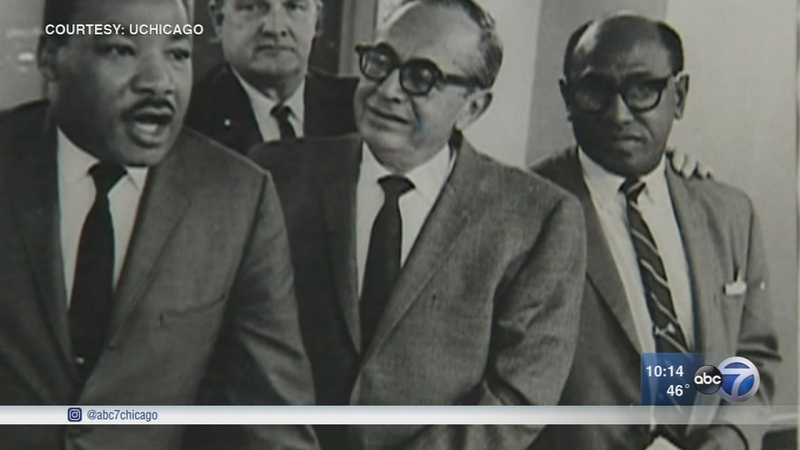 Activist, historian Timuel Black looks back at the legacy of MLK

April 4 marks the 50th anniversary of the assassination of Dr. Martin Luther King Jr. In the days leading up to the anniversary of that fateful day, ABC7 Eyewitness News spoke with the people who help keep his memory alive and preserve the memory he left.

One of them is Timuel Black, a historian, political activist and educator, and the community leader that helped bring Dr. King to Chicago. Today, at 99 years young, he still feels a responsibility to carry King's message forward.

"Dr. King left a feeling among many of us, we can do the impossible," Black said.

It's a feeling that he holds onto this day. Black can still remember the first time he learned of Dr. Martin Luther King Jr. and the movement he was igniting.

"In December of 1955, I saw this good looking, young man," Black said. "He was talking about racial segregation and prejudice, and then he enunciated the idea, 'I'm tired.'"

From there, Black's new goal was to bring King to Chicago. On April 13, 1956, King made one of his first major speeches in Chicago at Rockefeller Memorial Chapel on the University of Chicago campus.

"He was a Universalist and a man that was inclusive of all human beings, and he did it so well that he created feelings of enthusiasm over those who were watching and listening," Black said.

Black continued to take action with Dr. King in Chicago and Birmingham and Selma, building a bond that would grow to become a friendship.

Black vividly remembers the moment that he lost that friend.

Black recalls two white policemen commenting on King's assassination, saying they "hoped that would be the end" of the civil rights movement.

"I was so angry I responded to them that, 'I wish it was you instead of Dr. King,'" he said. "No, I was that angry. And fortunately they quieted down instead of beating me up."

King was dead but his message was not. Black continued on with his methods of non-violent protests and pushing for equality, making sure the next generation had hope.

He said continuing Dr. King's legacy helped empower and pave the way for black politicians like Carol Mosely Braun, the first black, female senator in Illinois, and even Barack Obama, the first black president of the United States.