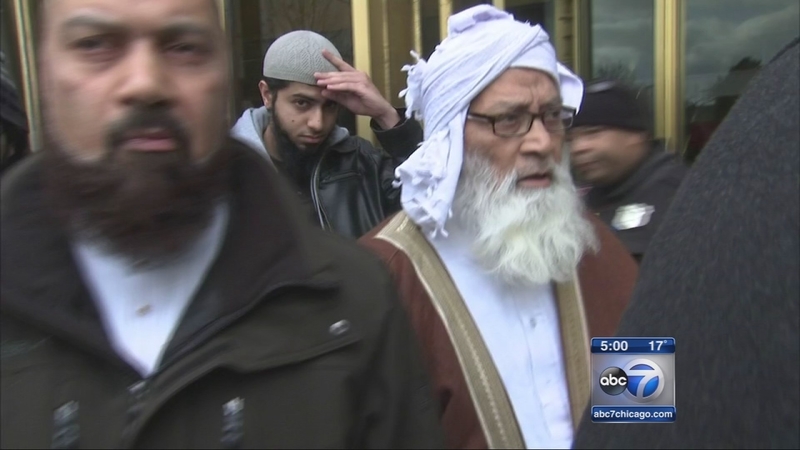 ELGIN, Ill. (WLS) -- The longtime leader of a suburban Islamic school has been charged with sexual abuse after the imam is accused of attacking a young woman who worked at the Institute of Islamic education in Elgin.

Mohammad Abdullah Saleem, 75, founded the school. In addition to sexual abuse charges, another woman has filed a civil lawsuit claiming she was abused.

The institute is a boarding school for boys and girls, grades 6-12. While Tuesday's criminal charges involve recent accusations by a former employee, the civil lawsuit includes allegations by former students, some going back to the 1980s.

"As a teen starting my freshman year in high school I imagined a lot of new, exciting things with this movement. Being molested by the principal, Addullah Saleem was not one of them."

These are the words of Jane Doe No. 2. In a civil lawsuit filed Tuesday morning, the now-grown unidentified woman, accuses Saleem of inappropriately touching her several times her while she was a boarding school student at Elgin's Islamic Institute of Education 15 years ago. She's s just one of four Jane Doe's included in the lawsuit, all of whom say Saleem, a prominent and highly respected imam in Chicago's Muslim community, sexually abused them.

"Even the slightest touching, over breasts and the private parts, is under the statute, sexual abuse of a child," attorney Stephen Denny said.

"He denies the allegations," defense attorney Thomas Glasgow. "He continues to be in good spirits. He's been in full cooperation with law enforcement."

The civil lawsuit comes at the same time as criminal sexual assault charges have been filed against Saleem. In bond court Tuesday, prosecutors said that just this past April Saleem assaulted a 23-year-old employee at the institute. It was her decision to file a criminal complaint that led other women to come forward with their stories. Victim advocates speaking in support of them Tuesday explained the women's decision is unusual given Islamic principles of modesty and purity.

"I think that encourages the silence and especially when we're talking about a religious leader who has so much respect and power in the community," said Nadiah Mojair, Heart Women and Girls.

Imam Saleem was able to post bond Tuesday. He left the criminal courthouse surrounded by family members and supporters.

The civil lawsuit also includes a John Doe, who alleges that he was raped, not by the Saleem, but by another staff employee at IIE while he was a student. The attorney in that lawsuit said that there are other men and women who have already come forward and will likely be joining the lawsuit in the near future.
Related topics:
elginsex abuse
Copyright © 2021 WLS-TV. All Rights Reserved.
TOP STORIES
Smollett testily leaves court after CPD officers testify for hours
Authorities: Student kills 3, wounds 8 at Michigan school
Needle attached to gas pump injures man in Chicago Ridge
Streamwood HS renames gym for retiring coach George Rosner
Illinois Vikings needs help getting to youth national championships
Walmart said she shoplifted; jury awards her $2.1 million
7 things to know about your new 'Bachelor' Clayton Echard
Show More
Michelle meets the parents during hometowns...and your next 'Bachelor'
NW Ind. explosion at steel mill rocks community
Chicago Weather: Partly cloudy, few sprinkles Wednesday
Smash-and-grab thieves hit Bucktown bike shop
Jesse Brown VA Medical Center reports COVID outbreak
More TOP STORIES News