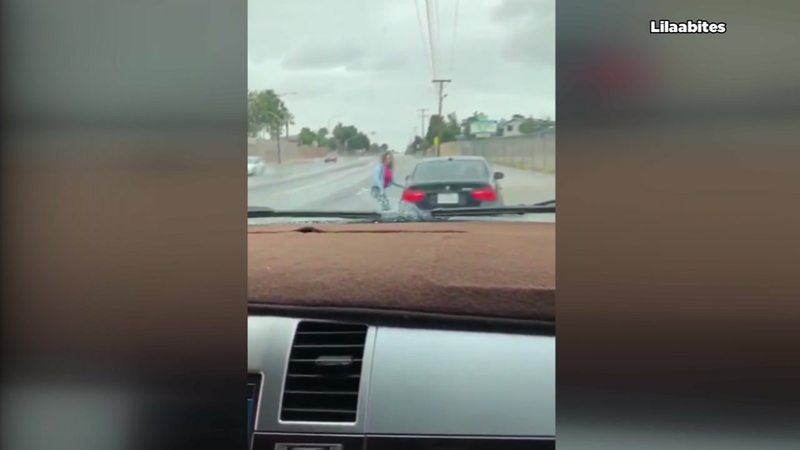 EL PASO, Texas -- Ferris Bueller might have a protégé.

An El Paso, Texas 14-year-old's antics looked like something out of a movie when he took off in his mom's brand-new BMW, except his ending differs slightly from that of the main character played by Matthew Broderick.

Liza Campero shared the whole ordeal involving her brother, Aaron Martinez, in a series of tweets that at the time of this writing have gotten more than 40,000 tweets and 142,000 likes.

Campero explains to our sister station ABC13 that it all started with Aaron disconnecting the WiFi in the house last Friday, which enabled him to kill the security cameras, and ultimately, stop his mom from seeing what he was up to.

Once he hatched the plan, he put it into motion while his mom was away, grabbed her keys and set off to pick up his best friend.

While his joyride was underway, Campero's mom was tipped off about the heist by the mother of Aaron's best friend.

Campero says she lives next door to her mom and checked to confirm if her new car was there. When she saw that it wasn't, the search to track down Aaron kicked into overdrive.

"She told me she was on her way home and to grab her belt," Campero told Eyewitness News.

Once she joined her mom, they stopped at Aaron's girlfriend's house to see if she had heard from the duo.

"The girlfriend called his best friend and there was another girl with them. The girl that was with them said that mom was looking for them," Campero explained.

Campero and her mom were able to narrow down Aaron's whereabouts because the boys were also in the girl's quinceneara. Since the kids practiced at the girl's house, Campero's mom knew where she lived.

Sure enough, Aaron was at a nearby intersection. The light turned green and Campero's mom wasn't far behind.

"Pull over now!" she yells, honking her horn as she pulls alongside him. She's then heard saying the words no child wants to hear.

"She said when she opened the door, he was smirking, and as soon as he saw the belt, he wiped the smile off his face," Campero said.

It appears the only thing that got hurt for Aaron was his pride -- initially. Campero says he did admit to being embarrassed by the incident at first, but then kids started calling the high school freshman "El Paso Ferris Bueller."

And in the end, even he admitted, it was a crazy stunt.

"He says he learned his lesson and it was deserved and needs to make better decisions and didn't do the right thing," Campero said.

Although Ferris was able to elude punishment from his parents in the movie, Aaron wasn't quite so lucky or slick.

Campero says her brother had all of his electronics taken away, including his Playstation 4. His bedroom door was also taken off the hinges and he can either be at school or with his mom.