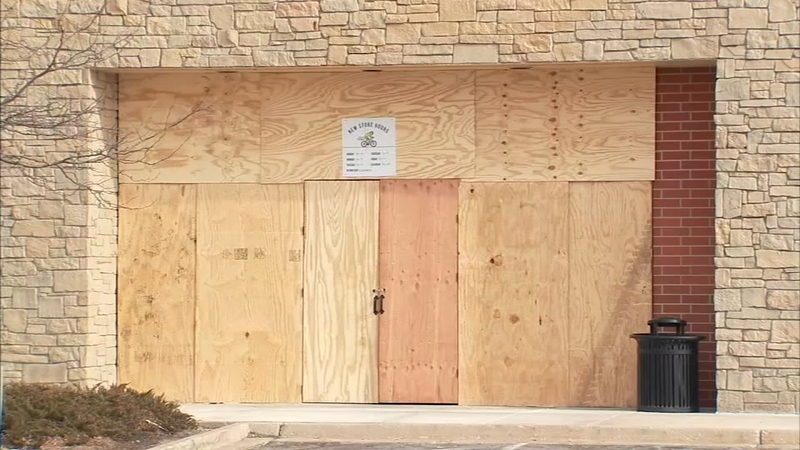 Recent bike shop thefts prompt Naperville store to board up

NAPERVILLE, Ill. (WLS) -- A startling trend of burglaries is impacting locally owned bike shops in the suburbs. Police say two stores in Naperville were burglarized last week, joining at least 15 other shops in surrounding suburbs that have been targeted since late November.

"It is a phenomenon that's been going on," said Cmdr. Michaus Williams, Naperville Police Dept. "We've yet to determine what they're doing with these bicycles."

EndureIt is a small, boutique bike shop in Naperville that is now missing roughly $60,000 to $70,000 of merchandise after someone broke in last Wednesday.

"They broke in through one of our windows, came through the window and took about 12 bikes total," owner Erik Walter said. "Didn't touch anything else, just went for the bikes and were in and out within 3 to 5 minutes."

Police don't know yet if the burglaries are all connected, but there are some leads they're looking into. The local bike shop owners are noticing a trend, too.

"They're definitely going for bikes over $2,000," Walter said. "They obviously know enough where they're targeting higher-end bikes."

The trend of burglaries across the suburbs now has many bike shop owners really concerned, with some taking extraordinary measures to keep their shops safe. Trek Bicycle in Naperville is now boarded up all the way around just in case.

"Due to the ongoing theft in the bicycle industry, we've decided to board up our windows and acquire extra security," a message on the store's voicemail recording said.

This all comes at a difficult time for these bike shops. Many of them are family-owned businesses already struggling to bring in merchandise.

"With supply chain issues and increasing material costs, it's been really hard to get anything from tires to bike chains to bikes themselves," Walter said.