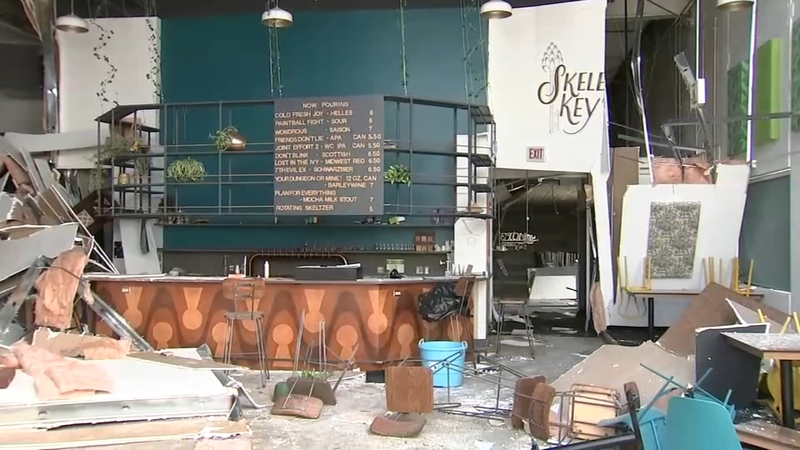 Naperville police kept watch all night to make sure the area remains safe.

Alda Dougherty collapsed on her bedroom floor the tornado tore the roof off her home.

"We have two closets and the bathroom and I just went down. Just stayed there until things stopped flying," she recalled. "I started screaming 'I am OK! But go, get everyone else!' My mom stays on the first floor, this is her room, she is handicapped. I was losing my mind."

As debris flew through the air, Alda found herself trapped, trying to crawl to safety in the dark.

"My husband said 'Come toward the light now. Alda, the roof is going to collapse. Get out now,'" she said.

The couple rolled out of bed in the RanchView neighborhood just seconds before the winds hit.

"The siren went off. I pushed my husband. He went that way, and I could not even make it around the bed to get out. Everything came tumbling down," Alda said.

Her son looked out his bedroom window and say his neighbors standing in their master bedroom. The walls were gone.

"He was those poor people standing in the middle of the room, like desperate, looking for what to do," she said.

"I tried to open my door and it would not open," said neighbor Simon, who owns that home. "Like, I felt a push of wind. I closed it but then I thought 'Mom and dad.' I opened it and ran out."

"When I got to the master bedroom the roof was gone and my mom was on the bed," he said.

The walls are gone, though the clothes still hang neatly in the closet. Both homes have been closed off for safety.

Brij Sharma was in the doorway upstairs when he heard the tornado warning siren Sunday night. He was deciding where to go when moments later the winds blew out the bedroom window and blew him down the stairs toward the basement.

"The blast was so heavy, it pushed me out of the door," he said.

The tornado blew off his roof in several places. Board-up crews have covered the open space for now but the house is now uninhabitable. They will have to leave their home of 28 years for now while it is repaired.

"If we die, we die in this house. I just want to live here," said Sita Sharma.

Around the neighborhood, many other homes have gotten various degrees of damage. One home blown to pieces from its foundation. The homes right next door are damaged but still standing.

The city has marked more than one hundred homes with orange x's on the garage door signaling they are uninhabitable. But neighbors are pitching in to try to help, including the Chicago Dutch Lions soccer club based in Lisle, which skipped practice Tuesday to do whatever they can.

A Naperville couple had to be rescued from under the debris of their destroyed home after a EF-3 tornado hit the western suburb late Sunday night.

"This is helping people move it to the other side of the street so that the city can take it. They have other things to worry about and I think just helping a little bit and helping them relax for a second would help a lot," said Alexa Quaranta of the Chicago Dutch Lions.

Crews are busy clearing the hundreds of trees from yards. While many homes in the neighborhood suffered damage, many others nearby were untouched. But many of those neighbors are also here helping out. Tyler Dillon and Ashley Jones brought donuts and coffee for them.

Popular Woodbridge brewery and taproom Skeleton Key Brewery has been devastated, and a new brand new space they opened two months ago has been destroyed.

"Seeing something that you've put so much of yourself into, that your family has put so much into... that has been such a community place and where you've met so many people, just gone," said owner Emily Slayton

The new taproom was Slayton's family's pandemic project. Two months ago, they finally started brewing and pouring for the public again. Business was better than ever.

"I've actually been terrified of tornadoes my whole life," she said.

While the one Sunday night may have put a pause on her livelihood, it's not an open question whether the business will move.

"So much of the things we put into it, that's a piece of us that we put into it. A big piece. This is our lives," said Emily Slayton, Skeleton Key Brewery. "It's hard to imagine being anywhere else. We love Woodridge. We love the village. We love our space. I can't imagine having to move."

Community steps in to help Woodridge clean up

The cleanup process in Woodridge is fully underway because the community has stepped up.

A veritable army of volunteers came out to Woodridge to help clean up the damage left in the wake of a Sunday night tornado.

At least 100 homes were damaged and many areas are still littered with trees. Given all of the damage, it is remarkable no one was seriously hurt.

"Luckily all of our food is being saved and we are able to eat," said Denise Staggs.

Her fridge is still cold, despite having no power, thanks to her next door neighbor who is letting her family plug into his generator to keep it running.

"I'm overwhelmed with the generosity of my neighbors," Staggs said. "I can't say enough. I love Woodridge. It's a great area to live and we definitely sat here all day and we did not go hungry."

Matthew Thorson is happy to help. His generator is also keeping his refrigerator powered on.

Many Woodridge residents have been touched by the kindness of strangers in the wake of a tornado that left behind a trail of severe damage.

"They might live over there and they might have a small tree down or something like that but then the Red Cross dude he's over here dropping off free food and he lives over and he's got damage to his house ...so that part it is super cool," Thorson said.

The cleanup effort started Monday morning just hours after the twister hit causing damage to at least 100 structures in the area.

The village is focusing its efforts on tree removal and disposal while ComEd has taken over the parking lot at Scholastica Catholic Church, using it as a staging ground to replace all of the electric poles downed by the tornado.

Piles of rubble littered Woodridge a little less than 48 hoursa after a tornado hit, but voluteeres had come out to help people whose homes were destroyed get back on their feet.

The community response to pitch in continues Tuesday, as people grab branches to clear.

Jenny Templin came over to help a friend.

"I came out with my three little boys," she said. "My oldest son plays baseball with Nate and this is his house, so we came to help them out because we were blessed. Our house wasn't damaged at all in the storm we wanted to do some good."

Karen Stahlecker walked the neighborhood with a cooler and memories of a devastating house fire.

"I went to Jewel and got gift cards too, because I remember when we had our house fire, people in Chicago did that," she said. "They just came and gave gift cards, TJ Maxx and grocery stores and Toys R Us, and I'll never forget that, so I'm kind of paying it forward."

Vince Scordato's sister-in-law has been on a fishing trip, so he's here holding down the fort.

"I'm cleaning off the roof, getting ready for the insurance guy to come over to adjust it make sure everything is safe up here," he said.

The Red Cross is also providing support. The shelter at Jefferson Junior High School took in a family overnight and will remain open. Anyone who needs assistance can also call the 24-hour Red Cross hotline at 1-877-597-0747.

Meanwhile, dozens of crews are clearing trees and fixing power poles as the village tries to recover.

"I don't know I feel calm because everybody around each other is helping one another so I think we're all doing pretty good, you know," Staggs said. "I think we all have our spirits up."

On Janes Avenue, there is much work to be done. Twelve-month-old Violet is one of the youngest tornado survivors. She and her parents rode out the storm in a laundry room in their home with no basement.

"She was with us when our roof flew off and our windows came in," said tornado survivor Alexis Reeder. "And I'm sorry, I'm going to start to cry. And she, and we were OK. He jumped on top of us, and we hunkered down."

With houses torn apart, a community is coming together.

Brian Rock from the Elevated Pie Co. served free pizzas in Darien, using a wood fire oven in the back of his truck...

"People are hungry," Rock said. "No one has power. No one wants to open up their refrigerator. One gentleman said he tried to work his microwave off his generator, and it didn't work."