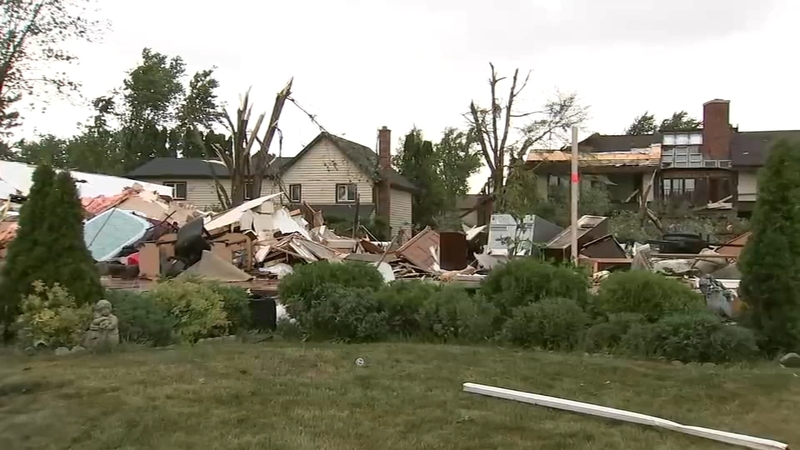 NAPERVILLE, Ill. (WLS) -- The EF-3 tornado that moved through the western suburbs Sunday night left a path of destruction three blocks wide and miles long in Naperville, especially in the Ranch View neighborhood.

The neighborhood is still in shock, and focused much of their efforts Monday on cleaning up and salvaging personal belongings. One home was completely leveled by the powerful winds.

The home is owned by Arwin and Masa Patel. An army of relatives and neighbors helped gather their belongings there.

The Patels were asleep at the time, and were found by a fire department rescue team buried under the rubble in a front room on the first floor, the debris field from their home scattered behind them. Their next door neighbor rushed to help.
"I yelled 'Hello?' and heard 'Help me, help me.' I was running toward the basement. I yelled "Arwin? Anyone?'," said Naperville resident Miroslav Sliva. "I ran to the neighbor from that door and asked him, can you help me?"

Surveillance images captured just how quickly the house was taken down.

"We looked at the time stamp. At 11:07 there was a house, then 30 seconds later it was gone," said neighbor Paul.
The Patels' 15-year-old grandson helped gather their belongings Monday, trying to take in the devastation.

"I was really sad because, like, this home, I've been coming to ever since I was little, and then, like, we had a lot of family get togethers and, like, we took a lot of pictures, like many memories, and just to have it gone like this, just to wake up one morning, it's really upsetting," said Shiva Patel, grandson.

Aerial footage showed the extent of the damage in the subdivision on Naperville's east side. Mature trees toppled from the roots up, roofs were ripped off homes. More than 130 houses were damaged; 22 were deemed uninhabitable.

"This has been a tragic day, certainly, for neighborhood residents, but it could have been a lot worse," said Naperville Fire Chief Mark Puknaitis.

All told, only eight people were taken to hospitals and there were no fatalities. Officials credited sirens and cell phone alerts with helping people get to safety in time.

Anthony Franco lost a tree that fell on his truck, but his home was not damaged. He is very grateful.

"Lucky, lucky to be alive," he said. "The tree could have went another way and landed right on us. We've got friends that live about five minutes away and their windows got blown right through their house."
Report a correction or typo
Related topics:
weathernapervilletornadostorm damagesevere weather
Copyright © 2022 WLS-TV. All Rights Reserved.
TOP STORIES
3 shot in Lakeview East after Pride festivities
River North shooting leaves 2 wounded
25 shot, 5 killed, including baby, in Chicago weekend violence
Target, Walmart weigh paying you not to bring back unwanted items
Woman fatally stabbed on South Side; 1 in custody, Chicago police say
CPD sgt. punched while making arrest on North Side, hospitalized
At least 6 injured after struck by vehicle on Northwest Side: CFD
Show More
Bolingbrook suspect held on $5M bond after deadly WeatherTech shooting
ABC7 says farewell to Stacey Baca after 20 years
3 stabbed in fight in Lakeview East
Father, daughter duo wanted in Girl Scout cookie scam, police say
US basketball star Brittney Griner due in Russian court
More TOP STORIES News