NCAA Tournament 2021: U of I, Loyola Chicago to face-off in 2nd round of March Madness Illini, Loyola Ramblers face of Sunday in 2nd round of NCAA tournament

CHICAGO (WLS) -- The NCAA Tournament first-round tipped off Friday with both the University of Illinois Fighting Illini and the Loyola Ramblers in action.

The Illini lived up to their top seed ranking as they beat 16 seed Drexel 78-49 Friday. The Ramblers also won their first-round game 71-60 against Georgia Tech.

Now, both teams will face off in the second round of the tournament Sunday.

Orange and Blue is everywhere at Joe's on Weed. It is one of the University of Illinois alumni club's watch party locations, and Illini pride is on full display.

March Madness is underway and for Illini fans, it's been a while since their team came into the tournament with this much hype and as a number one seed.

For basketball fans who had to miss out last year when the tournament was canceled, this is a big step closer to normalcy.

You won't be able to miss the NCAA bracket picks here: This Indianapolis hotel shows off for March Madness.

At the Orange and Brew in Downer's Grove, the suburban Illini crowd is celebrating the big first-round win and looking forward to moving on.

The timing of the strong season for the Illini is good for business for owner Eric Schmidt, who graduated from Illinois in the '90s and has suffered through many ups and downs with his school's teams.

"Illini fans are now looking forward to the possibility of playing Loyola in the next round," Schmidt said.

The Illini went 23-6 in the regular season and won the Big Ten Tournament. They are led by guard Ayo Dosunmu of Morgan Park High School.

It is the Ramblers' first NCAA tournament appearance since 2018 when they made a surprise run to the Final Four. They went 24-4 on their way to first place in the Missouri Valley Conference. They are led by seniors Cameron Krutwig and Lucas Williamson, who were both a part of Loyola's 2018 run.

Williamson was a freshman the last time Loyola went to the tournament and went all the way to the Final Four.

In honor of social distancing, they brought a cut-out to the game.

"I'm so excited, I couldn't miss this. I had to come," added his sister, Lauren Williamson.

Sister Jean, 101, will also be in Indianapolis to cheer the Ramblers on. She posted her bracket Thursday night and sent out a community message.

The 101-year-old team chaplain, Sister Jean, is fully vaccinated and attending her first game of the year in person.

She posted her bracket Thursday night and sent out a community message.

"Continue to cheer loudly, have a virtual watch party, and help bring us all together," she said. "We need each other to succeed.

The bracket she filled out has the Ramblers beating Illinois in the second round and going all the way to the Elite Eight. 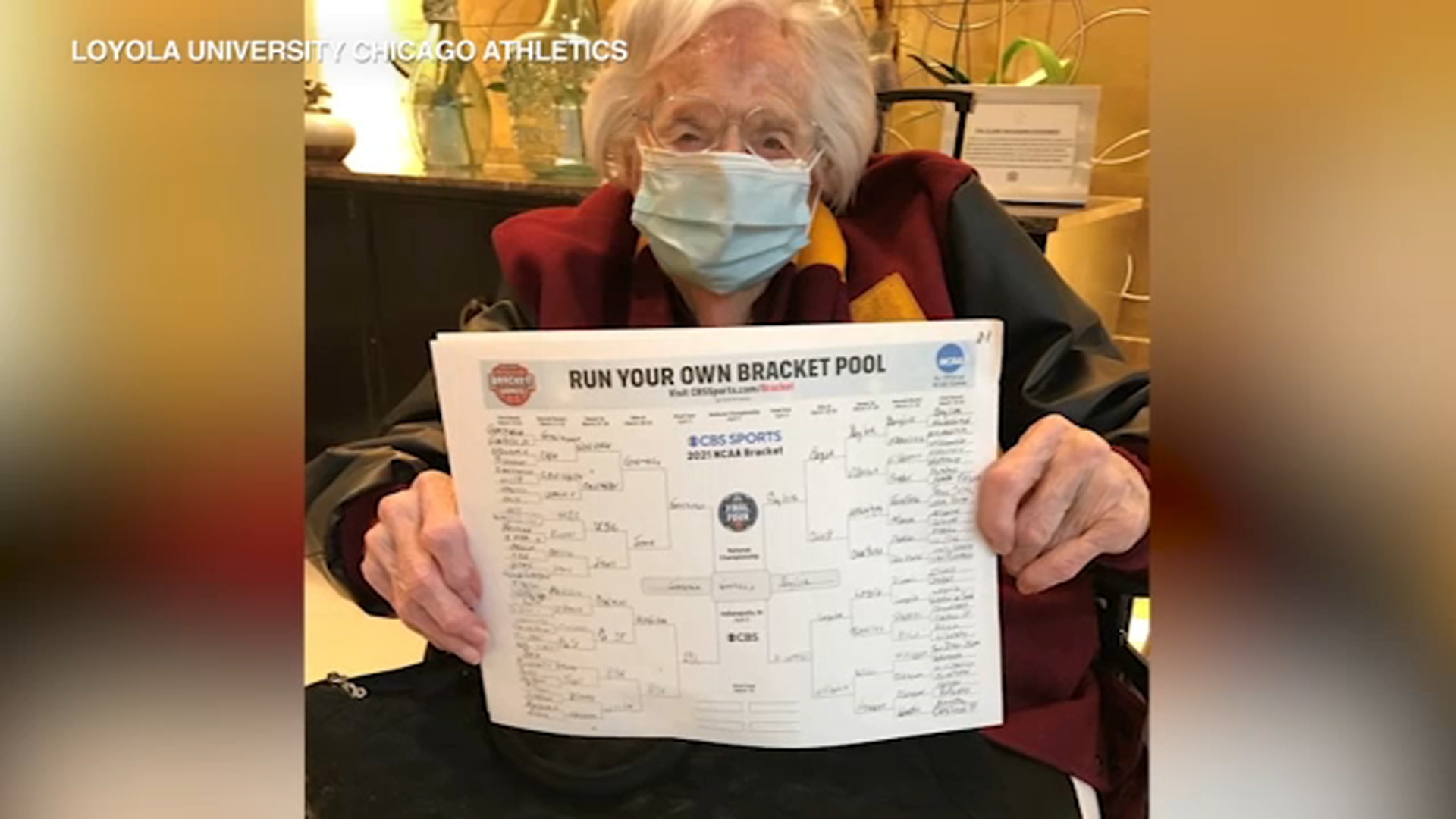 Sister Jean, 101, will also be in Indianapolis to cheer the Ramblers on. She posted her bracket Thursday night and sent out a community message.

"Now that we have this special event, during a different time, make the most of it and if together, virtually enjoy every bit of it," she said.

"I have Loyola in my Final Four in my bracket, so I'm ready for another Final Four run," said Loyola alum Lexi Peck.

Peck and her family watched the game at Joe's on Weed, one of the locations the Chicago Illini club set up for watch parties.

Many Illinois fans believe this is the year for the fighting Illini to win it all.

"It's a magical team, a magical season and you can definitely feel it," Hansen said.

"Kids from Whitney Young and Morgan Park says quite a bit about basketball in the city," said Luca's dad, Luke Williamson.

To say both fan bases have big Hoop Dreams is an understatement.

This team is just dang fun to watch...so the Madness, as it relates to the Illini, is definitely here," Hansen said.