Authorities have since charged the 14-year-old with murder.

Surveillance video from a nearby business shows the 14-year-old and two other teens being chased by another driver before the crash.

Authorities say the teens damaged the driver's vehicle by throwing eggs at it. The driver allegedly flashed a semi-automatic handgun at the teens.

Deputies are investigating a deadly crash involving three teens, a prank that went wrong and a driver who allegedly chased them with a gun.

In the video, you see the GMC Acadia, driven by the 14-year-old, run through a red light and smash into a woman's Ford F-150, killing her.

Bystanders are spotted running to the crash to help the victims as smoke rose from both vehicles.

Deputies are working through the night to recreate the deadly crash which unfolded on Aldine Mail Route Road on New Year's Day.

Deputies say the driver who was allegedly chasing the teens has been identified and located and is cooperating with the investigation. 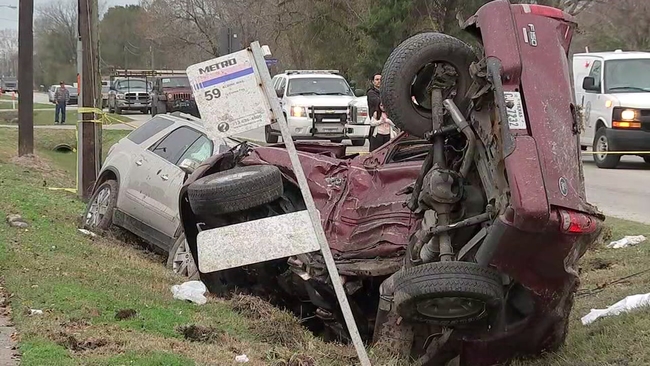