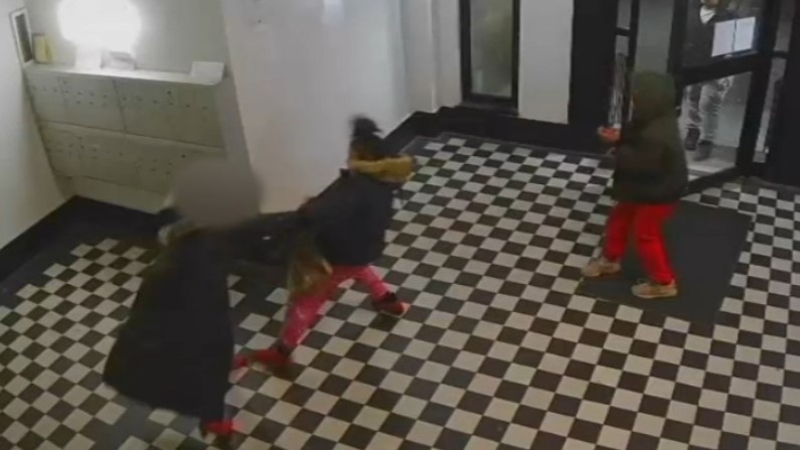 NEW YORK -- A 13-year-old girl has been arrested and charged in an attack on an elderly woman in her New York City apartment building lobby.

The 76-year-old victim was violently thrown to the ground as she clung to her purse in the Bronx building about 12:30 a.m. Sunday, after the three suspects pushed their way inside.

Police say the juvenile, who is not being identified due to her age, was the main aggressor in the robbery.

An elderly woman was robbed in the Pelham Bay section of the Bronx on Sunday.

She is charged with robbery as a juvenile, and her case will be handled in Family Court.

The victim suffered a fractured hip and was taken to Jacobi Hospital, and the the thieves took her purse, which contained $50, a wallet, a debit card and insurance cards.

The victim's son said she is a very active woman but that she might not ever be able to live the life she desires after needing a hip replacement.

"Who does something like that?" said the son, Sean, who didn't want his last name used. "She's very independent, and she wants to be able to do her own thing. And she was out dancing with her friends that night because that's one of her favorite things to do."

She will need months of rehab, and even then, a full recovery isn't guaranteed.
"There's a chance that she needs a walker for the rest of her life," Sean said. "For somebody like her, that's terrible."

Sean said that while his mother is shaken up, she is determined to getting back to living her very active life.

"Your actions have consequences, and they have consequences for other people," he said. "People get hurt, and one moment, it can affect someone for the rest of your life."
The other two suspects are still being sought, and anyone with information in regard to this incident is asked to call the NYPD's Crime Stoppers Hotline at 1-800-577-TIPS (8477) or for Spanish, 1-888-57-PISTA (74782).
Report a correction or typo
Related topics:
new yorkelderly womanarrestelderlyrobberywoman attackedu.s. & world
Copyright © 2022 WABC-TV. All Rights Reserved.
ROBBERY
2 women robbed at gunpoint in Uptown: CPD
CPD cancels all days off to handle possible Memorial Day violence
Mail carrier robbed at gunpoint in Hinsdale
3 robbed at gunpoint in Lakeview
TOP STORIES
CPD officer shoots, critically injures suburban carjacking suspect
ISP combating expressway shootings with new technology, tactics
Naperville KidsMatter VP removed from role after child porn arrest
Millennium Park curfew for minors takes effect Thursday
4 injured in Irving Park crash
Mother scolded by judge after gun goes off in son's backpack
Renter scams using Zelle to receive money from victims
Show More
West suburban mayor arrested for DUI, was asleep on expressway: police
Elderly woman with dementia missing from Markham
Tow truck driver found guilty in I-88 road rage murder
Suburban gymnasts ready routines for Special Olympics
Chicago's Chinatown booming as others see population declines
More TOP STORIES News