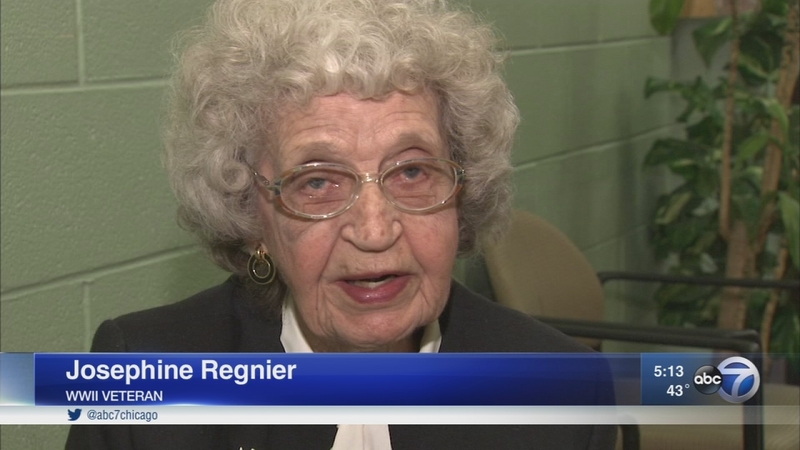 94-year-old veteran honored after attack outside her home

CHICAGO (WLS) -- A 94-year-old grandmother who survived an attack last month outside her Chicago home in December was honored on Sunday.

The Bridgeview Lion's Club honored Josephine Regnier with its Veteran of the Year award. During World War II, Regnier served in the Navy and was stationed in Brooklyn where she processed soldiers as they came home from the war.

Regnier was greeted with a standing ovation.

"I was proud that I was able to serve. I almost felt like a mother," she said. "The boys were so young. They still belonged at home but they served."

On Sunday, there was no sign of the bruises Regnier sustained just last month when she was beaten and robbed as she waited for her daughter in the gangway of her Garfield Ridge neighborhood home.

Left lying on the ground with several broken ribs and a blow to the head, the attacker got away with her purse -- but not before being caught on surveillance video.

"I'm still recovering. I don't think my ribs are right healed. And I slowed down an awful lot, but what do you want from 94."

"She's a good kind person who didn't deserved to be beaten, but to have all these nice people to come together and honor her it makes her feel special and she deserves that," said Regnier's daughter, Judy Dusk.

The man who beat and robbed Regnier was arrested a couple of days after the attack after he was turned in by a former jailhouse buddy. Olajuwon Claiborne, 26, of Chicago, was charged in her attack and denied bail as his case moves forward.