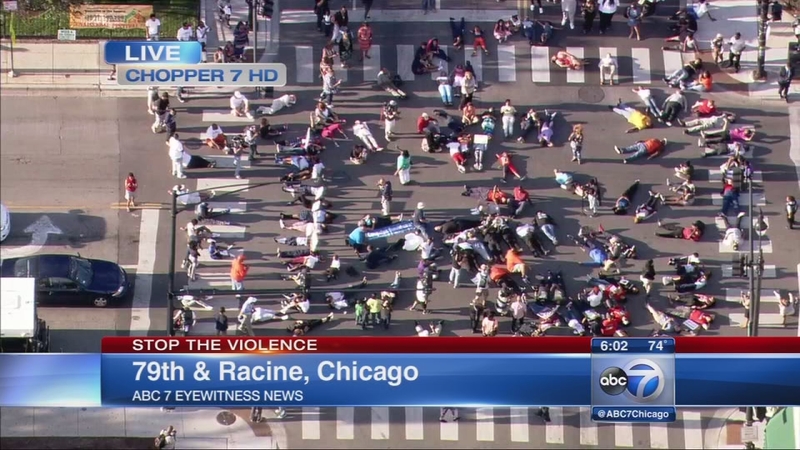 CHICAGO (WLS) -- August is Chicago's deadliest month in 20 years, with 86 people murdered as of Aug. 30 and hundreds more shot; the most murders since October 1996.

The latest happened around 2:15 p.m. Wednesday, when a 33-year-old man was shot and killed in the city's Marquette Park neighborhood.

So far in 2016, there have been 478 murders in Chicago, more than New York and Los Angeles combined.

Father Michael Pfleger of St. Sabina Church in the city's Auburn Gresham neighborhood gathered a group at 79th and Racine Wednesday evening to protest the rising city violence and lack of response from local and state officials.

A diverse group including young people, senior citizens, parents, community leaders, local residents and more blocked traffic and laid down in the intersection of Racine and 79th to protest the spiking violence and once again demand Illinois Governor Bruce Rauner call for a state of emergency to release federal dollars to help end the violence.

"We know we're short all kinds of police, we know our schools are underfunded, we know there's no economic development, people are unemployed, folks coming out of prison with no alternatives, so we need federal funds. It's a state of emergency," Pfleger said.

So far in 2016 there have been 478 murders in Chicago, more than New York and Los Angeles combined - they have only seen a total of 393 killings.

At an unrelated event Gov. Rauner wouldn't say if the latest crime stats warranted a state of emergency in Chicago but said he wouldn't bring the National Guard in to help stop the violence.

"There are not enough jobs and more education quality in Chicago. The schools, especially in low income neighborhoods in the South Side and West Side, have not been invested in properly, have not been supported. And that has not given the educational opportunity for the young people to see a career for themselves. And as a result they get drawn into gang violence," Rauner said.