WLS
By Diane Pathieu, Will Jones and Laura Podesta 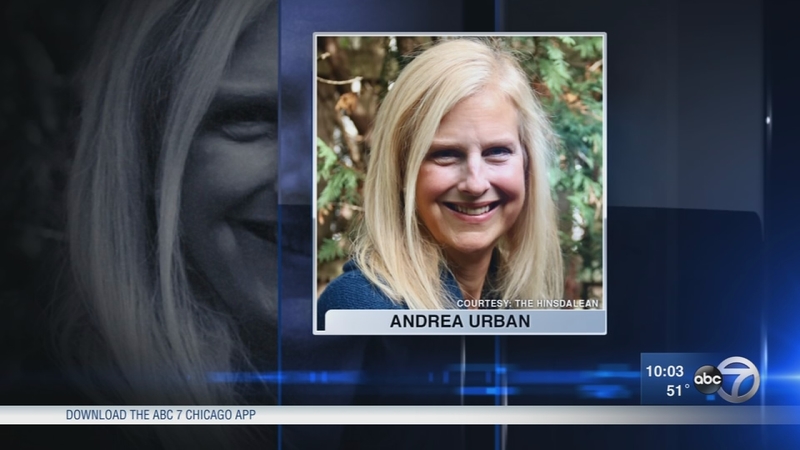 HINSDALE, Ill. (WLS) -- Police searched Friday for any sign of who may have murdered a mother of two in her home in southwest suburban Hinsdale.

A family member found 50-year-old Andrea Urban dead inside her home in the 700-block of Town Place just after 3:35 p.m. Thursday.

The Illinois State Crime Commission is offering a $5,000 reward for information that leads to the arrest and conviction of the person responsible.

Investigators said it was not a random attack.

An autopsy performed by the DuPage County Coroner's Office found Urban's preliminary cause of death to be multiple blunt force trauma. The final cause and manner of death are pending further investigation, the coroner's office said.

A homicide investigation is underway and authorities said they do not believe the killing was random.

Neighbors said Urban was a devoted mother of two, who had battled leukemia for years. They said she was a strong proponent of medical cannabis, often speaking out publicly and crediting it with improving her quality of life.

Almost every Sunday, Urban was in the front of at Hinsdale Covenant Church with her daughter. The church held a special service in her memory Friday night.

"We are so thankful for the time that we had with her and to watch her grow in faith, to grow in her relationship with god. This is a tragedy and this is something that we are grieving in this community," said Pastor Lars Stromberg.

Her battle with leukemia forced her to put her acting career on hold at times. The church was where she went for support.

"She definitely had needs, health needs, health concerns with her battle with leukemia. I think she found a community who was willing to hang on to her," Stromberg said.

Urban was also an actress, who worked on local television shows and did commercials. She moved back to Hinsdale to raise her children, who were placed Thursday in the care of relatives.

The children attended Hinsdale Central High School and Monroe Elementary School. Administrators sent out letters to parents notifying them about the homicide investigation. Counselors will be on hand at school Friday for students who need to talk.

"We had our six social workers, 13 counselors, our deans, psychiatrists all available to students today in a designated room on campus," said Bill Walsh, principal of Hinsdale Central.

Police asked for the community's help to solve the case.

"First, if anyone saw any suspicious activity near the home or anywhere in town, please let us know so we can investigate it as possible ties to this homicide," said Chief Kevin Simpson, Hinsdale Police Department. "We are throwing as many resources as we can - tapping into the DuPage County state's attorney, calling back our own investigators - to provide whatever resources we can to bring this to a quick end."

Investigators said later Friday morning they were following up on several leads.