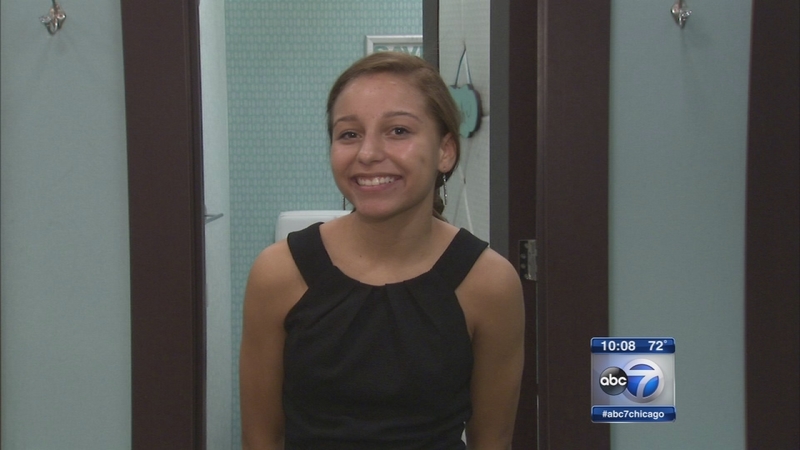 DEKALB, Ill. (WLS) -- Strangers refused to let a thief ruin a big night for a DeKalb High School student after the dress she bought for her homecoming dance was stolen.

It was her first homecoming dance in high school and thanks to the kindness of strangers and a police officer, the freshman went to a school dance she will likely never forget.

"She was in a predicament and I wanted to help her out. I just couldn't just leave her there with a police report and say 'have a nice night,'" said Officer Jonathan Jursich, DeKalb Police Dept.

Officer Jursich was responding to a call of a stolen dress and went above and beyond the call of duty. Anaiah Rollins, 14, had just gotten a manicure and pedicure at a salon for the homecoming dance. But when she got home, she realized her dress wasn't inside her bag, so she called the police.

"I figured he would just show up, so I didn't think I was going to go. But we went and got a dress and I went," Anaiah said.

It was the day of the dance and time was ticking, so Jursich - who has no daughters - called his female sergeant, who recommended he take her to Maurice's.

"She was all smiles, just a sweetheart. Very, very sweet girl," Jursich said.

A customer gave her a coupon to help pay for the dress and some jewelry. And to top it off she was escorted to dance in style - in a patrol car - and on time.

"I want to thank officer Jursich again, and Maurice's, and everyone that helped my daughter have the best possible experience that she could that day, and she'll never forget it," said Tammy Rollins, Anaiah's mother.

Rollins said she doesn't care if they ever find out who stole her daughter's dress because she says it all worked out and she gained a new friend for life.

The DeKalb Police Department's Facebook page has more than 15,000 likes for the picture of the Officer Jursich and Anaiah.