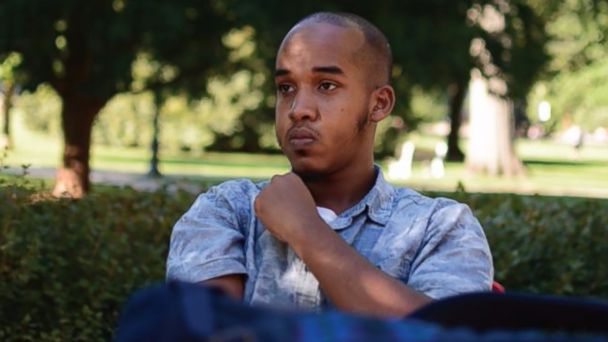 Appearing three minutes before the beginning of the rampage that left 11 people injured, the post reads: "I can't take it anymore. America! Stop interfering with other countries, especially the Muslim Ummah. We are not weak. We are not weak, remember that."

The post also invokes the name Anwar Al-Awlaki, a radical American-born al-Qaeda cleric, describing him as a "hero." Al-Awlaki was killed in 2011 but his propaganda has been linked to several domestic terrorist attacks in the years after his death.

"If you want us Muslims to stop carrying lone wolf attacks, then make peace," the post reads. "We will not let you sleep unless you give peace to the Muslims."

The post, which was on a page that appears to have since been disabled, takes the form of a photo of a computer screen displaying a text document.

Authorities identified Artan as the attacker in a press conference this afternoon, but said they have not determined a motive and the investigation is ongoing. Sources told ABC News that he is a of Somali descent and is a legal permanent resident in the United States.

Officials said that this morning's attack began when the assailant drove a vehicle into several people before exiting and slashing victims with a knife.

The attack comes as the ISIS terror group has been urging its followers in recent weeks to copy the vehicle attack that took place in Nice, France, when 84 people were killed by a terrorist driving a semi-truck through a Bastille Day celebration. And it comes two days after the terror group published a video instructing its followers on how to use a knife to attack non-believers. ISIS is not mentioned in the Facebook post.

"So many people, who are flipped by ISIS propaganda remotely, look like they are leading successful lives," said Richard Clarke, an ABC News contributor and former U.S. National Coordinator for Security and Counter-terrorism. "It's so hard to predict when the propaganda will get through to them to the point where they crack and go violent."

As the attack unfolded, a police officer near the scene responded almost immediately, shooting and killing the attacker within about a minute of the beginning of the attack. Several of the knife attack victims have been treated at nearby hospitals and are expected to survive.

Just three months ago an OSU student named Abdul Razak Artan was quoted in OSU's college newspaper, The Lantern, as he discussed his troubles finding a place to pray on his new campus.

"I wanted to pray in the open, but I was kind of scared with everything going on in the media. I'm a Muslim, it's not what the media portrays me to be," he is quoted in the paper as saying. "If people look at me, a Muslim praying, I don't know what they're going to think, what's going to happen. But I don't blame them. It's the media that put that picture in their heads, so they're just going to have it, and it - it's going to make them feel uncomfortable."

In The Lantern, Artan said he is a transfer from Columbus State, presumably Columbus State Community College. Online records from that school said he graduated from there in May with an associate of arts degree.