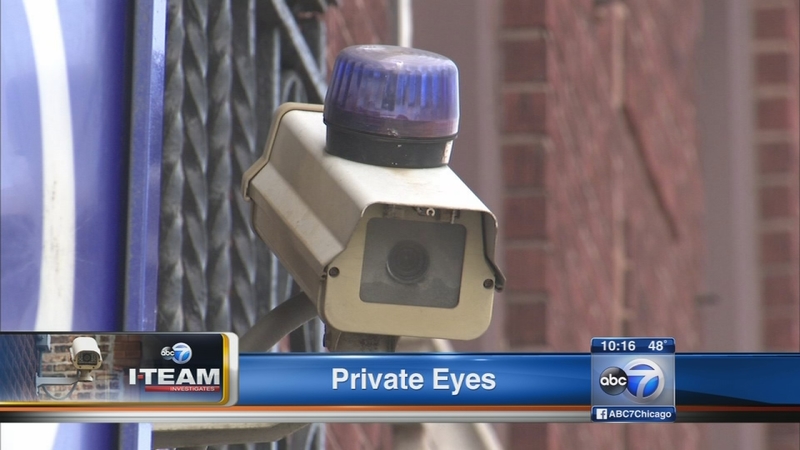 CHICAGO (WLS) -- Pay more property taxes and, in return, get armed, private cops to police your neighborhood plus, additional security cameras to monitor your streets. This is happening in Chicago, benefits of a Special Service Area or SSA.

However, some say these "private eyes" aren't preventing crime, just pushing it a few blocks away.

World War II veteran Porter Cross was beaten and robbed nearly three years ago as he walked home. A security camera recorded video of his attackers. Police tell the I-Team that video evidence helped lock up the suspects.

The camera was installed by the security firm hired by Special Service Area 14 in Chicago's Marquette Park neighborhood.

"They were the ones that turned over the video tape to Chicago Police," says Cynthia Steward Jones, Cross's daughter.

SSA 14 is one of 53 special service areas in the city, districts that fund extra services through an added property tax approved by homeowners.

"The owners of the bank accounts are the residents of the area," says Joe Polikaitis, SSA 14 Executive Director and Lithuanian Human Services Council vice president. "They are being represented by a commission."

Marquette Park spends 100 percent of its Special Service Area funds on private security. Two armed officers in fully equipped squad cars patrol a mostly residential, one-square-mile area of the neighborhood. They respond to nearly 4,000 calls every year and can detain suspects but not arrest them.

The I-Team found 32 percent of all SSAs now have security as part of their programs, including the Chicago Lawn community.

"Originally I was against it but now I'm totally for it," says Jim Janas, SSA 59 commissioner. "Every penny that we do bring in through the extra property tax goes right back into our little community."

Commissioner Janas says SSA 59 spends money on new signs and windows, but a third of the budget is spent on security.

Rita Ortiz says daily fights have stopped since the private patrols showed up a year ago.

"I usually call them if something happens," Ortiz says, "and they come over right away."

Michael Martin is a Chicago police sergeant. When off-duty, he works private security.

"Having worked in this district for the last 9 years, I've known most of the problems with gangs and drugs and guns," he says.

Martin says the number of incidents near the businesses they patrol has definitely gone down but the crime goes somewhere.

"If you go in a couple of blocks, you're still going to have gang activity," Martin says.

"The whole purpose of the security force is to help people to feel comfortable to go out and spend money in the corridor," Love, who owns Turkey Chop, says.

"I think people have seen the change but it doesn't necessarily eliminate the issue," says Tom Otto, an economic development planner.

The Chicago Police Department says it does not track the impact private security has on crime.

Incident reports obtained by the I-Team through the Freedom of Information Act provide statistics from the private security firms about crimes within each Special Service Area. A Marquette Park report shows their private officers were called 79 times between December and March to assist Chicago police.

"I know Marquette Park is out there, they're the eyes in the neighborhood, we can go to other areas where they may need more officers," said Chiago police officer Edward Kropp.

Cynthia Steward Jones says private policing is one of the main reasons she decided to move to Marquette Park 10 years ago.

"I think it's worth the extra money," Jones says.

Costs vary for business and home owners who are part of a Special Service Area. In Marquette Park, the average is about $100 a year, but in the Chicago Lawn community it's higher. Business owners there pay closer to $600 extra in taxes every year.