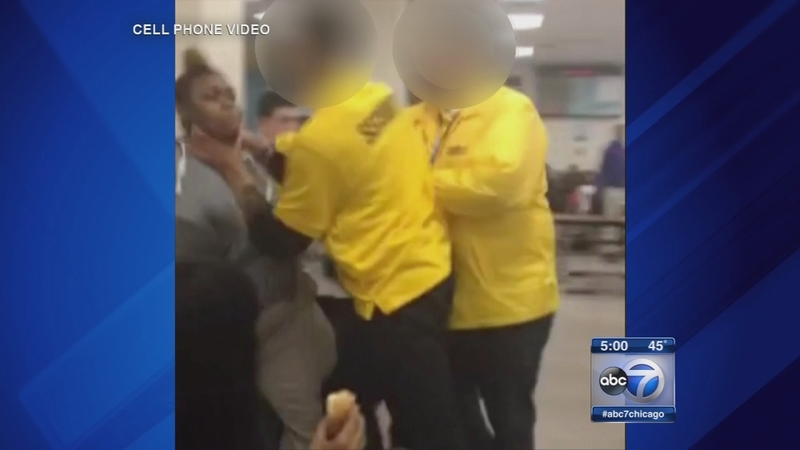 H.S. junior claims she was choked by security guard

The principal at Proviso East High School in Maywood and the school superintendent did not even know the video existed until Nikerrah Walker and her family made them aware of it on Monday. Now the school district is working with the Walkers and the situation is under investigation.

Walker is spending the week at home after being suspended, but the 16-year-old junior says she is not the one who should be disciplined for a situation that took place in the lunch room last Friday.

After a verbal altercation with another female student, Walker says one of the security guards tried to intervene by choking her and it is caught on video tape.

"When he choked me, he grabbed me with two hands," she said. "I felt his hands press the side of my throat and that is when I knew I couldn't breathe."

Walker has asthma, which she says made the situation worse. She said what prompted the security guard to grab her may have been the way she was talking to the female student.

"I was talking with my hands. I guess he thought I was going to hit her, but I didn't," she said.

Regardless of how she acted, Walker's mother says her daughter does not deserve to be treated like this from a school employee.

"The video was so strong to me, I could only look at it once," Thelma Walker said. "I saw the way my daughter was restrained, it was not right."

Thelma Walker says she doesn't want to see the security guard lose his job, but she and her daughter do want him disciplined.

"In my opinion, I feel like she should be the one doing anger management classes," Nikerrah Walker said.

Walker said while there were dozens of students and security guards who witnessed the choking, the guard was not disciplined. The school district said it will not comment on the incident until they view the videotape.