ABC7 I-Team Investigation
WLS
By By: Chuck Goudie and Ross Weidner
CHICAGO (WLS) -- The ABC7 I-Team investigated an illicit underground network operating in your neighborhood. Billions of dollars in dirty money is hidden in plain sight, connecting Chicago to a criminal underworld.

Chicago and the suburbs are major hubs for international criminal organizations, where dirty drug money made across the Midwest is secretly stashed until it can be smuggled across U.S. borders. An undercover federal agent took the I-Team inside a high-stakes battle to keep Chicago streets safe.

"What I think people don't understand is that this is happening all around us, all the time," said Agent X, Homeland Security Investigations.

Because he is regularly face-to-face with diabolical drug criminals, he is hiding his face and we have altered his voice. A Homeland Security Investigations undercover officer we're calling Agent X says he would be dead if cartel operatives he encounters recognize him.

"It's a dangerous business, the cartels are obviously known for their violent methods and their techniques, their ways to intimidate people, that's how they keep their business going," said Agent X.

For Agent X, dodging death threats is a hazard of the job.

"We knew that the cartel wanted to kill me, because of the role I was playing, we owed them an excessive amount of money and they said why don't we just kill this guy and they said well if we do that, we'll never get our money man," said Agent X.

And in the last three years alone, his team seized about 30 million dirty dollars in the Chicago area.

Chicago is the local hub for all of dirty drug money operations in the Midwest. Smaller bills from street sales in cities like Detroit, St. Louis, and Minneapolis are consolidated here, sometimes even packed by smugglers into simple suitcases, then hauled back across the Mexican border.

Drug money is hidden anywhere that works, from boxes of laundry detergent stuffed with cash, to hi-tech compartments, called traps, concealed in vehicles.

Statues of "Santa Muerte", or holy death, and Jesus Malverde, the patron saint of drug traffickers are dead giveaways that agents have uncovered a stash house or drug operation. Homeland security agents even found this "quick money blessing" candle on one of their raids.

"This is a dangerous game that we play," said Gary Hartwig, Special Agent in Charge, Homeland Security Investigations.

Dangerous and lucrative: federal agents believe $20 billion in drug money flows out of the U.S. each year, and authorities detect a shift by traffickers to a scheme called "trade-based money laundering." That's where criminals use seemingly harmless local Chicago businesses as dirty money fronts that buy actual, legit items - like car parts, flour, sugar, or even gold - ship that out of the country and then resell it to get their dirty money back.

"You can be taking your kids through the drive through at a fast food restaurant and actually have a large scale money transaction going on in the parking lot right next to you and not be aware of it. It doesn't matter whether you live in the suburbs or city, North Side or South Side, it really doesn't matter. This is pervasive through the whole Chicagoland area," Hartwig said. 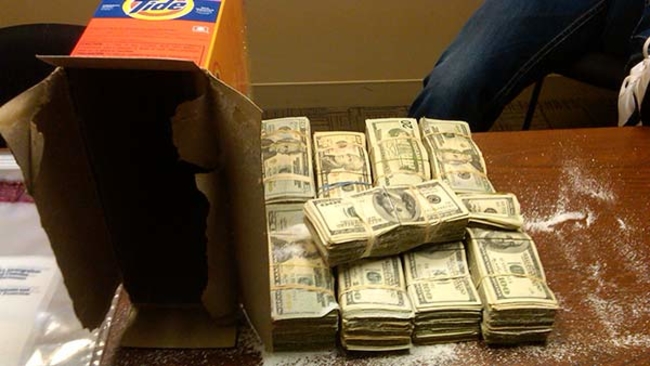