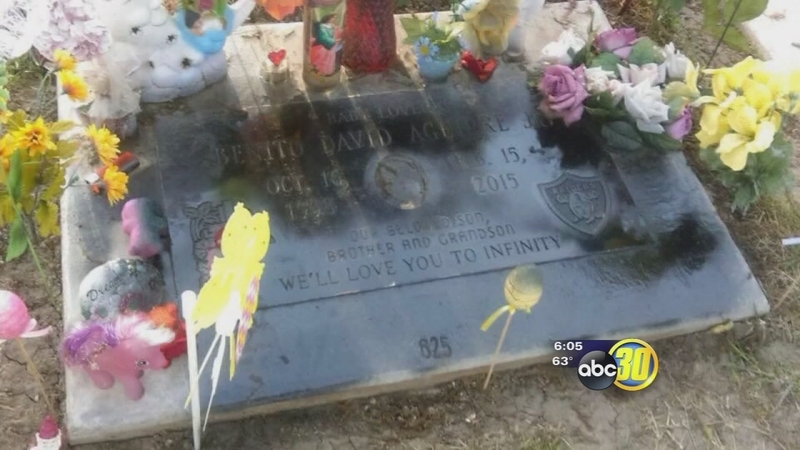 MERCED, Calif. -- A Merced mother is making a plea for vandals to stop targeting her son's grave site and others at the same cemetery.

That grave is where a teenage boy was buried after his murder last year. His family members visit often to grieve together and feel close to him. But they're also frustrated by the lack of respect for his final resting place and others.

Benito Aguirre's grave is decorated with flowers and colorful trinkets left by loved ones who visit every week. It's their way of honoring the 16-year-old who was shot to death outside Tenaya Middle School in February of last year. Merced police later arrested two suspects and said the motive was jealousy over a girl.

"It's been difficult. It's been devastating to say the least," said Gloria Aguirre, the victim's mother.

Now Aguirre is dealing with more devastation after someone covered her son's headstone in black spray paint over the weekend.

"My nephew called, and I rushed over here like a madwoman and started scrubbing with Windex and a little sponge," she said.

Aguirre said this isn't the first time her son's grave has been altered. People have also stolen vases, lights, and other items. And in some cases it seems friends have left behind unwanted tributes, including words spray-painted in the grass and beer cans.

Managers said it's a problem that impacts other parts of the district cemetery as well.

"It's mostly young people who show up, and they've got lots of alcohol. There will be marijuana left on the graves, a lot of smoking marijuana that goes on out here in broad daylight. They leave it on a grave as a memorial," said Jimmy Frye, Merced District Cemetery manager.

Frye said staff members ask people to leave on a daily basis, but with 30,000 headstones, 45 acres of grass, and daily burials, it can be tough to keep an eye on everyone.

"We have eight guys who run the grounds out here. It's a lot of work. We have two large cemeteries, so to chase people around we simply don't have the time for it. But in order to keep the peace and keep this place respectful and dignified, we have to be proactive," Frye said.

Now Aguirre is also making a plea for people to stop desecrating this sacred place - and let her son rest in peace.

Officials said there's an ordinance with a $1,000 fine for drinking at the cemetery. So they're asking residents to call police if they see anything suspicious.

Managers are also looking into the possibility of adding extra surveillance cameras and lights.