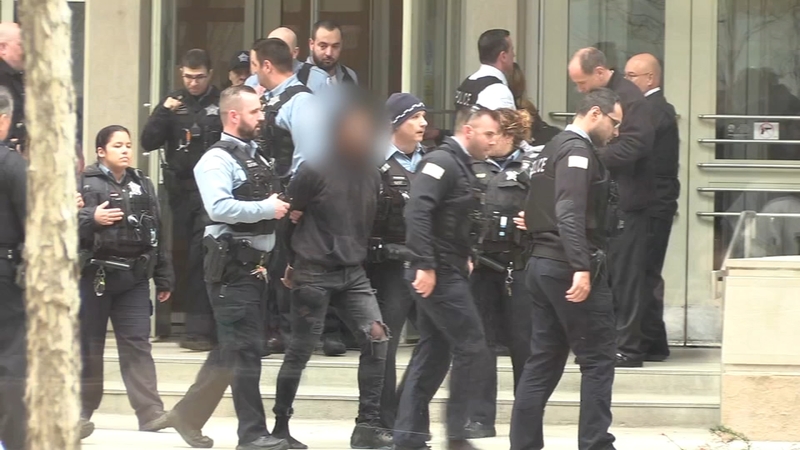 Police said a 19-year-old carjacking suspect ran from a traffic stop and into a medical school building in the 300-block of E. Superior St. around 1:30 p.m., triggering a lockdown.

Chicago police said officers began following the suspect after a carjacking in the 2000-block of W. Arthur on Chicago's North Side around 12:48 p.m.

Chopper7 was overhead as police searched for a suspect on Northwestern's Chicago campus Monday afternoon.

As officers pursued him on foot, witnesses said they saw a man sprint into a Starbucks and run up the stairs into the medical school.

"This guy came running down the street with a shoe off - he looked like he was messed up," witness Sean Fannin said. "He ran inside the building and up the stairs, and that connects over to the hospital over here. And then we saw the police officer come in behind him with the gun drawn, pulled out. And there's doctors, students and people just walking around and stuff. It was wild."

"He ran into them doors there, ran up the stairs, went through the doors there, came back down to the basement," witness Edwin Jimenez said. "That's when SWAT came went in and cleared the building. He ran right into the sergeant."

It's not clear if the suspect was armed at the time, but CPD spokesperson Tom Ahern tweeted a photo of a gun that police recovered from the stolen vehicle.

Firearm recovered from stolen vehicle from which the suspect fled. @Area3Detectives are investigating. #ChicagoPolice pic.twitter.com/GQhR4hIBFc

Northwestern tweeted that the "active threat" on campus was over around 2:20 p.m. According to the tweet, the suspect was apprehended in the basement of the Ward Building.

Video showed officers walking the suspect out of a medical school building in handcuffs.

"Horrible," Jimenez said. "I'm glad they caught him though. Finally we get a carjacker off the street."

Police said charges against the suspect are pending. No injuries were reported.