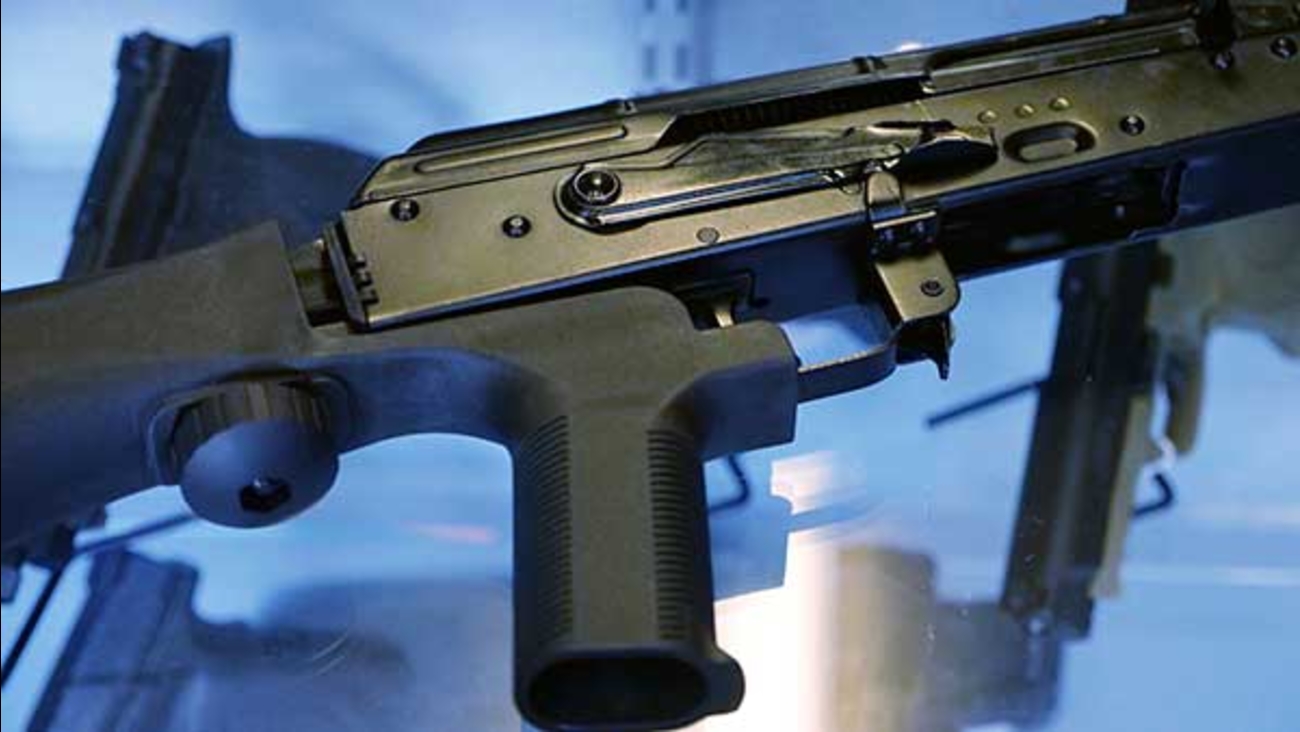 A little-known device called a "bump stock" is attached to a semi-automatic rifle at the Gun Vault store and shooting range Wednesday, Oct. 4, 2017, in South Jordan, Utah. (Rick Bowmer)

WASHINGTON -- The National Rifle Association announced Thursday that it supports a review of bump fire stocks to see if they are in accordance with federal law.

The group's support comes following the mass shooting that took place in Las Vegas earlier in the week and amid calls to ban the devices, which allow semi-automatic weapons to simulate automatic weapon fire.The NRA is typically the nation's most prominent lobbyist group against stricter gun regulations.

"In the aftermath of the evil and senseless attack in Las Vegas, the American people are looking for answers as to how future tragedies can be prevented. Unfortunately, the first response from some politicians has been to call for more gun control. Banning guns from law-abiding Americans based on the criminal act of a madman will do nothing to prevent future attacks. This is a fact that has been proven time and again in countries across the world. In Las Vegas, reports indicate that certain devices were used to modify the firearms involved. Despite the fact that the Obama administration approved the sale of bump fire stocks on at least two occasions, the National Rifle Association is calling on the Bureau of Alcohol, Tobacco, Firearms and Explosives (BATFE) to immediately review whether these devices comply with federal law. The NRA believes that devices designed to allow semi-automatic rifles to function like fully-automatic rifles should be subject to additional regulations. In an increasingly dangerous world, the NRA remains focused on our mission: strengthening Americans' Second Amendment freedom to defend themselves, their families and their communities. To that end, on behalf of our five million members across the country, we urge Congress to pass National Right-to-Carry reciprocity, which will allow law-abiding Americans to defend themselves and their families from acts of violence."

Florida Republican Rep. Carlos Curbelo is planning to introduce legislation Thursday to ban the sale of bump fire stocks, an accessory that can allow semi-automatic firearms to rapidly increase their rate of firing rounds, similar to that of an automatic weapon, which are banned by federal law.

"I think we are on the verge of a breakthrough when it comes to sensible gun policy," Curbelo told reporters Thursday, saying his office has been "flooded" with calls from other lawmakers asking about the bill.

He said that the shooting in Las Vegas, where the shooter appeared to modify several weapons with bump stocks to fire rounds more quickly, demonstrated that these devices, are in his opinion at the "outer limits of what the law allows, in this case something that we strongly believe should be illegal."

"This is such a blatant exploitation of the law, circumvention of the law, that the growing bipartisan consensus is a product of," Curbelo said about the shift after years of inaction by majority of congressional Republicans on gun legislation.

Curbelo's comments follow those of House Speaker Paul Ryan, a Wisconsin Republican who signaled openness Thursday to looking into bump fire stocks, and other Republicans have shown an openness to at least discussing a ban on the devices.

In the wake of the Vegas shooting, Ryan told Hugh Hewitt in an interview for his MSNBC show that "clearly that's something we need to look into."

Ryan's comments come as one senior House GOP member told CNN enough House Republicans are likely to agree to a push for legislation that would ban bump stocks that something could pass in the GOP-controlled House.

"There's enough Republicans who are looking for something that they can say 'I did something.' And the bump stock is an Obama policy. That was approved by the ATF in 2010 and 2012, so why would we defend that?"

The ATF said in 2010 that it did not believe bump stocks to be regulated under existing gun laws because it is a firearm part.

This source believed that there would be a GOP-sponsored bill from a group of moderate Republicans that would narrowly address the issue. While many in the GOP conference will oppose it, this member believed based on conversations with colleagues that there would not be a huge pushback to block it, even from the NRA.

It's unclear how the legislation would be drafted, but the easiest way would be to simply reverse current ATF policy rather than institute a ban on the manufacture and sales of the accessories.

In his comments, Ryan said that he -- like a lot of members of Congress -- just learned about the accessories in recent days.

"Look, I didn't even know what they were until this week, and I'm an avid sportsman," the Wisconsin Republican said in a clip of the interview that aired Thursday. "So, I think we're quickly coming up to speed with what this is. Fully automatic weapons have been banned for a long time. Apparently this allows you to take a semiautomatic and turn it into a fully automatic so clearly that's something we need to look into."

Asked if GOP leaders will back the bill, Curbelo said "I think leadership needs to see that there is strong support and that's my goal."

He said he's received calls from "dozens" of his House Republican colleagues but declined to say how many would sign on and said he hoped to introduce it sometime on Thursday.

Pressed about those gun rights advocates who argue this approach could be a slippery slope to additional gun restrictions, Curbelo waved that argument off, saying, "Do the right thing every time. It's obvious that this is a flagrant circumvention of the law, and no member of Congress should support any circumvention of existing law."