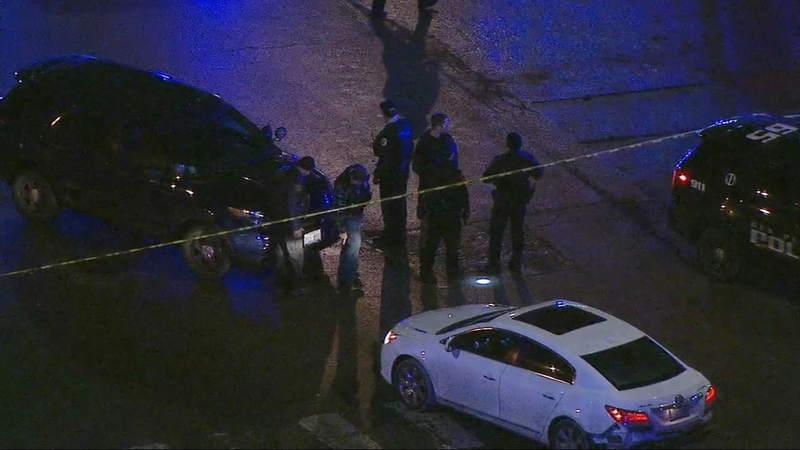 CHICAGO (WLS) -- A Chicago police officer is among three people shot on the city's Northwest Side Tuesday night after a bank robbery led to a police chase, a crash, and "gun battle," police said.

CPD Superintendent Eddie Johnson said the incident started in northwest suburban Des Plaines, where a bank was robbed. Des Plaines police took one offender into custody at that scene, who fled on foot. The second suspect escaped and stole a car, Johnson said.

Upon seeing Chicago police, the suspect opened fire, according to Johnson, and struck the injured officer in the head.

While police initially said the officer suffered a graze wound, just after 9:45 p.m. CPD Spokesman Anthony Guglielmi said imaging revealed the bullet "did penetrate and exit the officers' skull." Doctors said he has suffered a skull fracture and bleeding on the brain. He is in serious but stable condition. His doctors said the injury, while tangential, is "definitely more than a graze wound."

Doctors at Illinois Masonic said the Chicago police officer suffered 'more than a graze wound,' and was in serious but stable condition.

Johnson said the pursuit ended in a music store in the 4200-block of Irving Park Road. The suspect exchanged gunfire with a Des Plaines police officer, at which time a 15-year-old boy, who was at the music store for a piano lesson, was struck in the arm and abdomen. The teen was taken to Comer Children's Hospital in serious condition, and his condition has since stabilized.

The 32-year-old offender was struck and killed by gunfire, Johnson said.

Johnson said CPD officers did not fire any shots during the exchange of gunfire.

Johnson said the injured officer is 46 years old, and is a 17-year veteran of the Chicago Police Department who works out of the 17th District. Johnson said he has received more than 100 awards and commendations for his police work.

"A lot of people started running away, just fearing for their life," said Bryan Lewis, witness.

"The bus driver pulled over about the middle of the block, next thing I know I heard pop, pop!" said Brian Deets, witness.

Chicago Mayor Lori Lightfoot tweeted a statement Tuesday night, saying in part, "Tonight, our hearts are breaking as we're reminded of the service and sacrifice our officers make every day to protect us and keep our communities safe."

Tonight, our hearts are breaking as we're reminded of the service and sacrifice our officers make every day to protect us and keep our communities safe. We're monitoring the situation, and Amy and I are asking all Chicagoans to pray for the CPD officer who was shot this evening.