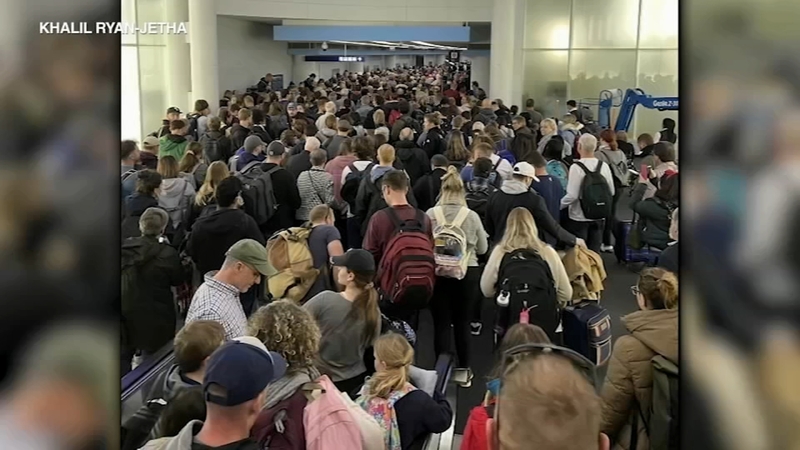 CHICAGO (WLS) -- Passengers traveling through Chicago's O'Hare International Airport were waiting for hours to get through customs Saturday night.

The airport released a statement on Twitter, saying that screening for possible COVID-19 cases for passengers coming from Europe are causing delays.


Attention travelers: customs processing is taking longer than usual inside the Federal Inspection Services (FIS) facility owing to enhanced #COVID19 screening for passengers arriving from Europe. Thank you for your patience.

Some passengers told ABC7 that there are wait times of several hours at least for people returning to the United States.

Many expressed concern about their health because they are standing next to hundreds of people and feel they can't social distance themselves. Meanwhile, crews were handing out sanitizing wipes and snacks.

The crowds & lines O’Hare are unacceptable & need to be addressed immediately.@realDonaldTrump @VP since this is the only communication medium you pay attention to—you need to do something NOW.

"These crowds are waiting to get through customs which is under federal jurisdiction," Pritzker said. "To the frustrated people trying to get home, I have spoken with the mayor and our Senators and we are working together to get the federal government to act to solve this. We will do everything within our power to get relief."

Passengers traveling through Chicago's O'Hare International Airport are waiting for hours to get through customs Saturday night.

This is unacceptable. The reactionary, poorly planned travel ban has left thousands of travelers at ORD forced into even greater health risk. @realdonaldtrump and @CBP: no one has time for your incompetence. Fully staff our airport right now, and stop putting Americans in danger. https://t.co/gswIaHwelx

President Trump announced a 30-day restriction in travel to most of Europe earlier this week. On Saturday, Pence announced that the United States extended the restrictions to travel from the United Kingdom and Ireland as well.

Under the restrictions, American citizens, green card holders and others are still allowed to return home to the U.S., but will be funneled to 13 airports and be subjected to health screenings and quarantine orders, according to two people familiar with the plan who spoke on condition of anonymity before the official announcement Saturday.

RELATED: US to restrict travel to UK, Ireland amid COVID-19 crisis

Trump has said he's "considering" a domestic travel ban in certain areas of the country.

We are aware of the reports of increased wait times at some airports across the nation. CBP along with medical personnel are working diligently to address the longer than usual delays. Nothing is more important than the safety, health and security of our citizens. Full statement: pic.twitter.com/JyPRSS9snr

Morgan said the agency understands passenger frustration with the delays but personnel are working to address the long wait times while ensuring everyone's safety.

"We are aware of the reports of increased wait times at some airports across the nation. We understand this can be extremely frustrating, especially after a long flight. CBP along with medical personnel are working diligently to address the longer than usual delays. In several airports we're seeing an immediate improvement. Our goal is and remains to process passengers as safely and efficiently as possible. We appreciate the patience of the traveling public as we deal with this unprecedented situation. We're continuing to balance our efficiencies with ensuring the health and safety of all American citizens through enhanced medical screening in accordance with CDC guidelines due to the global COVID-19 pandemic. Nothing is more important than the safety, health and security of our citizens."

The major delays come as Illinois lawmakers and health officials urged people to stay inside.

"Social distancing is important," Pritzker said earlier in the day. "Keeping people from being in big groups is very important."

Despite the warnings, hundreds of Chicago residents still ventured out to celebrate St. Patrick's Day a little early.

Despite warnings of the COVID-19 pandemic, hundreds of Chicago residents still ventured out to celebrate St. Patrick's Day a little early.

"When you go out, you are potentially giving someone else COVID-19, so please go home," Pritzker said Saturday.

There are currently 66 reported cases of novel coronavirus in Illinois. Two Sangamon County patients were most recently reported as testing positive for the virus.

Despite the pandemic, many bar crawls continued this weekend.

"Bars are in a dilemma because this is a big weekend for St. Patrick's Day," Mayor Lori Lightfoot said. "Lines outside of the bars and down the streets, we do not want to see that because that suggests there are too many people inside right now."

Other countries have ordered bars and restaurants to shut down to control the spread of the virus.