Video shows semitrailer nearly crash into Ohio school bus: 'This could have been devastating'

Bus was on its way to Ralph E. Waite Elementary in Medina School District
By Bob Jones, WEWS 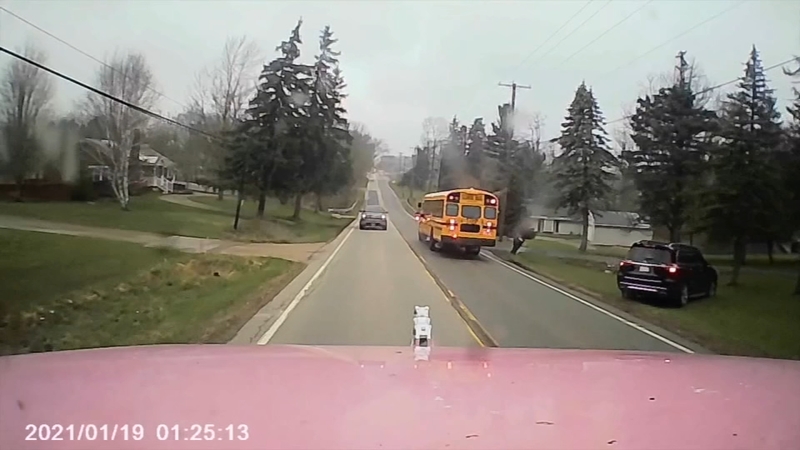 MONTVILLE TOWNSHIP, Ohio -- Tuesday started out as an average day as kids boarded a bus to head to an Ohio elementary school.

But what nearly happened to the bus on its way to Ralph E. Waite Elementary in the Medina School District sent shivers up the police chief's spine, WEWS reported.

"This could have been devastating to our community and to the whole county, the whole area," the chief said.

With the bus pulled over in the northbound lane, its lights flashing and its stop sign arm out, a bus driver, who was training a new driver was alarmed by the sound of a horn behind her.

"God, God, he ain't gonna make it. Hurry and go," she can be heard saying on video.

An 80,000-pound tractor trailer hauling sand, which had its own camera on board, was barreling toward the back of the bus. The driver was unable to stop the truck.

You can hear the stress in his voice in the dashcam video.

"He started down-shifting, hitting the brakes, and he realized he's not stopping," the chief said.

Cameras also captured a car behind the bus pulling off the road.

A pickup in the southbound lane had to back up into an SUV to make room for the oncoming tractor trailer.

There were some terrifying moments for Josh Click, who was behind the wheel of that pickup.

"I'm just kind of sitting there. Next thing I know I hear a big, a horn, and I look up and I realize there was a tractor trailer heading down my way head-on," Click said.

Police estimate the semi was going 40 to 45 miles an hour as it weaved around the bus without hitting any of the vehicles and avoiding a disaster.

Click's quick thinking in his pickup may have also saved lives.

"I had to do what I had to do to protect myself and the kids," he said. "It was one of those moments that can happen in an instant."

Back on that bus, with multiple views of the near miss with the tractor trailer, there was both shock and relief.

The driver eventually got the semi to stop about 1/4-mile down the road.

Police believe he called someone from the trucking company and was very rattled.

"I'm standing on it, nothing happens. All of a sudden the buzzer goes off. I can't stop. It's not slowing down," he can be heard saying.

While police are grateful a disaster was averted, there are still questions.

Police were not initially aware of the potential brake failure, and the semi driver drove it back to a truck yard before officers had a chance to talk to him.

"Certainly, that's something we're gonna look at. There's a school bus violation. Is it unsafe vehicle? I don't know," the police chief said.