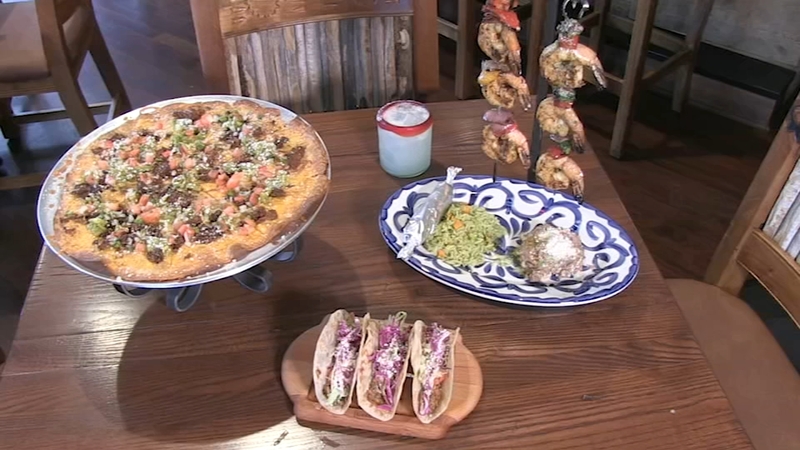 CHICAGO (WLS) -- There are dozens of Mexican restaurants in Chicago, and many more that serve Tex-Mex or other Mexican-inspired dishes. But if you're looking for something specifically Sonoran, as in the desert area between southern Arizona and northern Mexico, our Hungry Hound says you've only got one option.

If you've spent any time in Tucson, or maybe attended the University of Arizona, you'll be familiar with Sonoran cooking. Not just the mesquite wood for cooking, but also the dominance of flour tortillas instead of corn.

One transplant missed the food of the region so much, he decided to build a restaurant based on those same regional distinctions.

The mesquite wood burns hot beneath the grill at Old Pueblo Cantina in Lincoln Park. This new restaurant at the corner of Webster and Racine takes its cues from Tucson, Arizona.

"Old Pueblo is the nickname for the locals of Tucson. So when you're from the Old Pueblo, you're from Tucson, Arizona," said owner Ryan O'Donnell.

He said his cuisine is based on whatever comes from the Sonoran Desert region.

"Sonoran cuisine, which is the southern part of Arizona and the northern part of Mexico. So we call it border cuisine," O'Donnell said. "Corn doesn't grow very well there because of the non-humidity factor, but wheat does, so we use flour tortillas."

Those tortillas he mentioned can be used a few ways.

The obvious answer is for the tacos. At Old Pueblo Cantina you can also find them griddled and then filled with cumin-scented ground beef, topped with tomatoes, lettuce, cabbage and cotija cheese. Larger balls are pressed into 13-inch circles, griddled on both sides, then brushed with butter and rolled with a docker, to knock out the air pockets. O'Donnell said that technique makes it easier to bake and keep uniformly crisp. Once an order comes in, they're topped with Longhorn cheddar and chihuahua, plus carne seca, or dried beef.

"The desert sun is what dries and cures these sides of beef. They take it down, marinate it in garlic and lime and chile pepper then they shred it and that's what goes on the cheese crisp," he said.

The dish is baked along with green chiles and finished with pico de gallo and cotija cheese.

"They call it a Sonoran quesadilla. It's an open-faced quesadilla. When you sit down, it's basically the appetizer you get when you go to Cantinas in Arizona you order a cheese crisp," he said.

Plenty of dishes are grilled over mesquite as well, including flank steak and shrimp skewers. The way they're presented, hanging and brushed with chimichurri butter, allows that seasoned butter to drip onto the green rice studded with carrots and the refried beans.

All grilled dishes come with flour tortillas to make it easier to create your own Sonoran tacos. While you're at it, you won't want to overlook the free salsa that comes with your chips. Chiltapin peppers are used exclusively to make it.

"They're small, little dried berries that grow off a shrub that's about two to three feet off the ground and they're native to Southern Arizona and Northern Mexico," said O'Donnell.

In Steve's Extra Course Video, he takes a closer look at one of their homemade desserts: flan.
EMBED More News Videos

In Steve's Extra Course Video, he takes a closer look at one of their homemade desserts: flan.