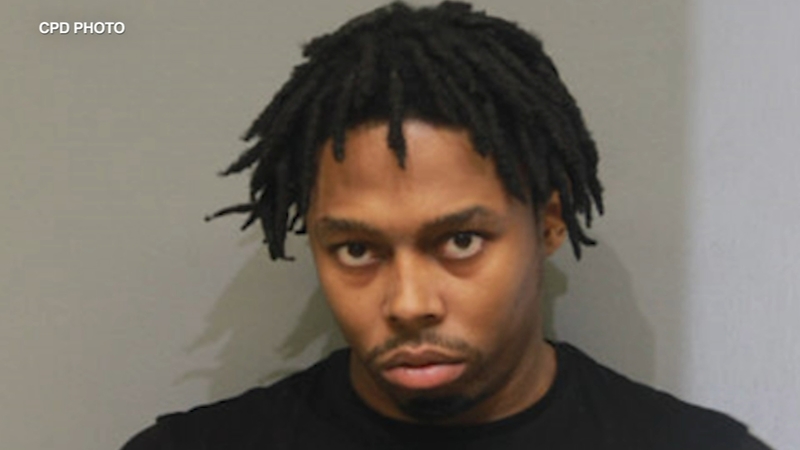 CHICAGO (WLS) -- Federal investigators say when David Johnson put his extended clip 9mm pistol to the head of an Orland Park man, he ordered the driver to give him the keys and not to move. Within seconds they say Johnson was on his way in the black Mercedes and the carjacked owner was left standing in front of his own house unharmed.

Johnson, the alleged thief, was on court supervision when it happened.

It started on a quiet south suburban street just before 5:30 p.m. this past Friday. A man was in his Mercedes in front of his own house when suddenly police say 25-year-old Chicagoan David Johnson "opened the drivers door and pressed the muzzle of a handgun to the side of his face."

Data show this kind of crime is not uncommon; it has happened 268 times so far this year in Chicago alone, almost triple the number of times it occurred in the same period of time in 2020.

Authorities say Johnson sped off in the Mercedes and was spotted by Oak Forest police officers on patrol a few minutes later. He allegedly careened the stolen car into several other vehicles when he got off Interstate 57 at 119th Street and finally crashed and stopped at 112th and Hamlet.

According to police, Johnson ran off and fired a handgun at them. That gun has not been found, but inside the stolen car police recovered a Taurus 9mm with 23 rounds of ammo in a high-capacity magazine.

According to his federal court file, he was currently on supervised release after pleading guilty two years ago to illegally possessing a Taurus .45 caliber pistol.

Less than a month before the carjacking in Orland Park, court records reveal Johnson was in front of a federal judge who admonished him "to comply with the conditions of his supervised release."

Johnson was just released from prison last April in that federal gun case after serving 14 months. He was free on supervised release, sometimes known as mandatory parole. Even though he'd been in and out of the criminal justice system since age 14, in his previous case his attorneys told the judge he had a high school degree and completed training to be a forklift operator.
Report a correction or typo
Related topics:
orland parki teamcarjacking
Copyright © 2021 WLS-TV. All Rights Reserved.
I-TEAM
COVID tops cause of death for police for past 2 years
Government mandate tells phone companies to block robocalls
Jan. 6 insurrection yields biggest federal investigation in US history
5 charged in Gold Coast shooting of rapper FBG Duck
TOP STORIES
FOP pres. posts video after ordered not to talk about vaccine mandate
Heaviest pumpkin in US disqualified for crack
Funeral held for 4th Chicago firefighter to die from COVID
4 hurt after Amtrak train collides with semi car hauler: VIDEO
State trooper hit by DUI driver on I-90, police say
Loop store un-boards windows more than a year after unrest in Chicago
Mom delivers 14 lb. baby after suffering 19 miscarriages
Show More
Chicago's 'must stop' Mexican restaurant is more than tacos
Chicago Weather: Clear skies, chilly Saturday night
Man, 55, shot in Wicker Park amid robbery attempt near 6 corners
Pritzkers made $5.1M last year, tax records show
Pritzker delays vaccine deadline for some state workers
More TOP STORIES News