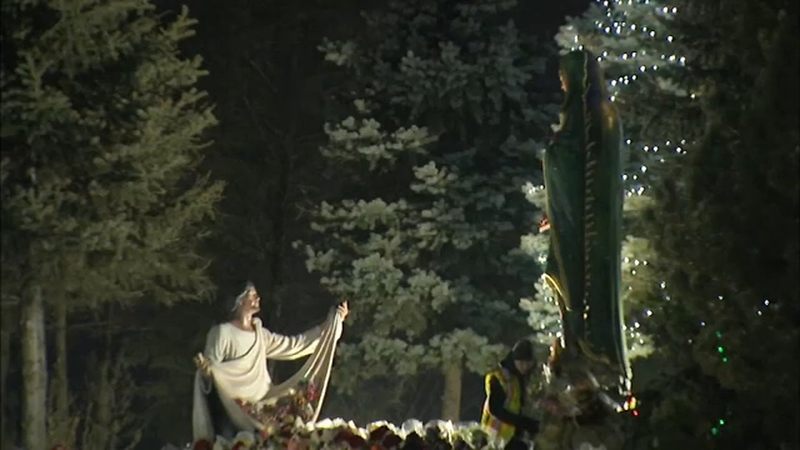 The feast of Our Lady of Guadalupe, which got under way Tuesday, is a celebration of the patron saint of Mexico.

"They're coming with joys, thanksgiving, and also asking for miracles in life," said Father Esequiel Sanchez of Our Lady of Guadalupe.

In at least one case, a miracle has already been answered.

"When she was trying to come over across the border, the people who were trying to cross her over just left her alone there and she kind of got lost," pilgrim Brenda Lorenzo said in a translation from Spanish by her daughter. "She promised the virgin that she was going to come every year to visit her and complete her promise."

Brenda Lorenzo wore traditional clothing and donated a year's worth of coin collections to pay penance for an answered prayer.

"Every time she's alive and every time she is near her she is going to visit," her daughter said.

Father Sanchez said Our Lady of Guadalupe is a major icon of immigrants, and not only those of Hispanic origin. The feast draws between 200,000 and 300,000 Catholic pilgrims from around the world.

The shrine at Our Lady of Guadalupe is the largest outside of the church and basilica in Mexico City where Catholics believe she appeared in 1531.
This year's feast comes as an ongoing immigration crisis unfolds at the border of the United States and Mexico. Earlier this year, Father Sanchez accompanied Catholic Extension, a national fundraising group, to the border. As a result of that mission work, Father Sanchez asked that group to join the feast day.

For the first time, visitors will be able to participate in hourly masses inside the Chapel of St. Joseph. Masses will continue through Wednesday afternoon.