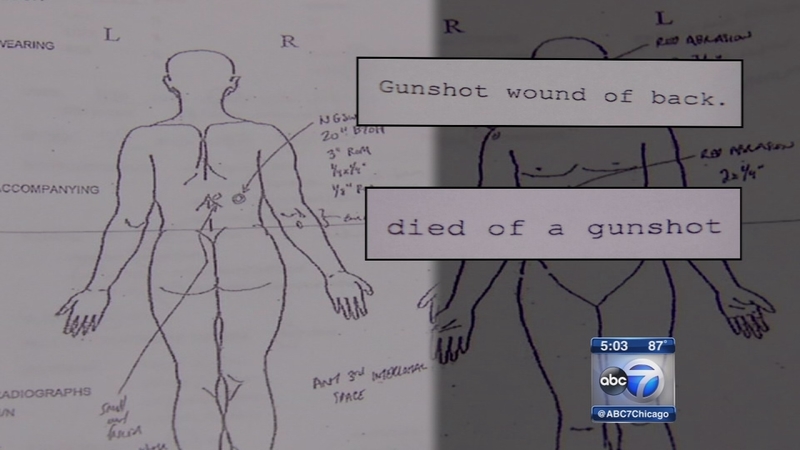 CHICAGO (WLS) -- An autopsy shows the 18-year-old shot and killed last month by a Chicago police officer during a chase was hit on the right side of his back.

The autopsy released Wednesday by the Cook County Medical Examiner's Office also determined that Paul O'Neal didn't have any drugs in his system when he was shot July 28 in a chase that was partially captured in by police body cameras and dashcams.

Much of what the autopsy notes had already been reported, but it provided some new details into the controversial shooting and comes as aldermen convene another hearing examining police oversight.

While O'Neal showed little regard for safety when he side-swiped a police car, but officer themselves appeared to violate procedure by shooting down a residential street at a fleeing car. The bullets did not strike O'Neal; he sustained only the single gunshot wound while in the back yard of a home. It was not caught on camera.

The report released Wednesday also includes a detective's narrative of the event, and suggests confusion about shots fired by police during the foot pursuit. The report says the officer believed "the shots fired were coming from O'Neal." The officer "fired his Glock 9mm handgun five times in an attempt to stop the threat."

Wednesday afternoon at City Hall, a handful of aldermen listened to activists and experts weigh in on ways to hold police officers more accountable.

"We are calling for essentially community control of the police," said community activist Mark Elliott.

"There are too many barriers, gray areas that protect an officer who wants to circumvent the system. Those are things we have to clear out," said 45th Ward Alderman John Arena.

But those concerned with police accountability wondered why the officers who backed up the story that Laquan McDonald was a threat - a story disputed by dashcam video released 17 months later - have still not been disciplined. McDonald was shot 16 times and killed by Chicago police officer Jason Van Dyke two years ago.

When asked, Chicago mayor Rahm Emanuel tossed the political hot potato back to his police superintendent.

"If you have a mayor weigh in, your other question will be 'why did you weigh in on a personnel decision?'" Emanuel said.

Chicago Police Superintendent Eddie Johnson did not comment Wednesday afternoon on when discipline decisions may come, although the deputy chief who signed off on the McDonald shooting report announced earlier this week that he is retiring.