"This short is really about seeing how much more beautiful your life can be if you have that little bit of courage to ask your peers and neighbors for help when you need it."
KGO 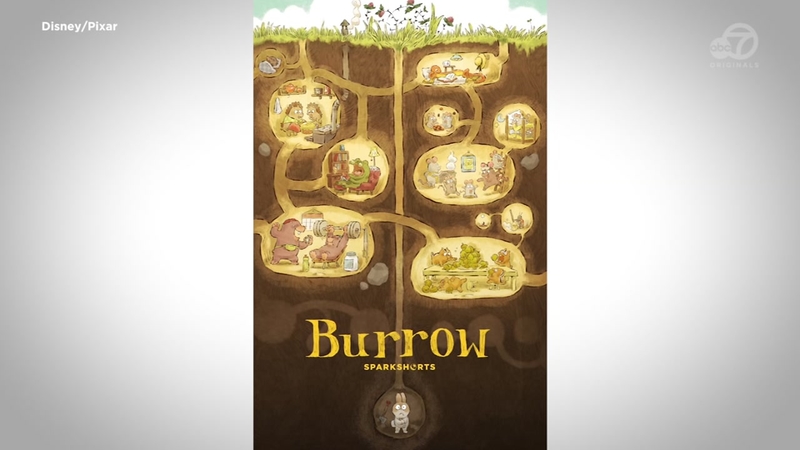 It tells the story of a bunny who ends up digging herself too deep, so to speak, in her attempt to build a burrow as beautiful as her neighbors, and who humbly seeks help from those around her.

For first-time Pixar director Madeline Sharafian, the inspiration for "Burrow" didn't have to come from afar. In fact, it came from within Pixar's walls.

"I noticed I would see my teammates showing each other their drawings and sequences, and I would hide in my office. Like, 'you can't look, not until I'm totally done,'" Sharafian explains. "I was pulling all of these late nights and working weekends, and I was just making this lonely lifestyle for myself. So this short is really about seeing how much more beautiful your life can be if you have that little bit of courage to ask your peers and neighbors for help when you need it."

Boosting her in-office confidence was the fact that Pete Docter, Pixar's chief creative officer and the director of "Soul," chose "Burrow" to release alongside his feature.

RELATED: Everything to know about 'Soul' on Disney+: Release date, cast, 'Burrow' short and more

Sharafian says "Monsters, Inc.," which Docter also directed, inspired her to pursue a career in animation.

"To have Pete ask if he could put the short in front of his movie, it's like the most exciting thing that's ever happened to me," says Sharafian.

Like her bunny character, Sharafian has grown to embrace collaboration, but with the coronavirus pandemic raging, she's unable to share creative space with her coworkers in person.

"Something that I've missed over this quarantine is just that feeling of being around really good people all the time," Sharafian says, adding she looks forward to everyone coming back to the Pixar campus in 2021.