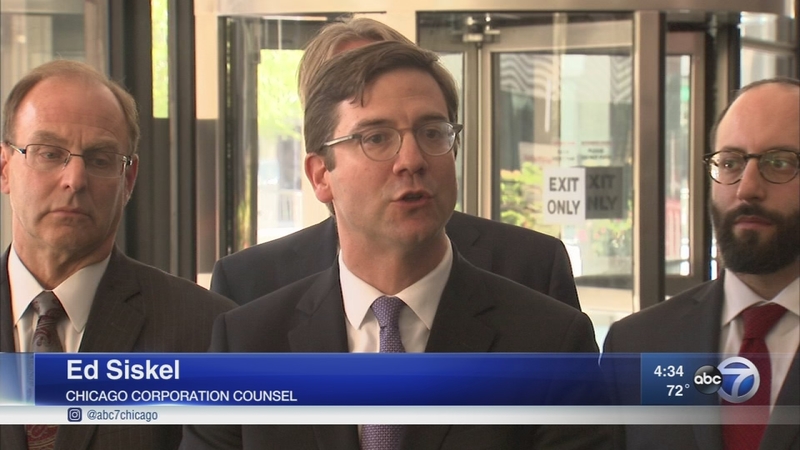 CHICAGO (WLS) -- Attorneys for the city of Chicago argued in federal court Monday that the Trump administration's efforts to block federal grants to the city because it's a so-called "sanctuary city" is unconstitutional.

Chicago police stand to lose $1.5 million, another $700,000 goes to Cook County and some for suburban police. City attorneys said it's not about the money, but the principle behind the fight that makes the lawsuit important.

City lawyers said that the U.S. Department of Justice had no authority to impose conditions on Chicago that would require police to detain criminal suspects for 48 hours to allow immigration officials time to check their legal status.
They argued such conditions are unconstitutional and they claimed the Attorney General was trying to coerce cooperation by withholding public safety grant money.

"It's a dangerous precedent because it goes directly to the ability of state and local law enforcement to make decision about what is the best way to wage the crime fight," Ed Siskel, Chicago corporation counsel, said.

Chicago sued the Justice Department claiming if it were denied the grant money based on its Sanctuary City, status the funds would then go to other municipalities.

In the past, Chicago has used the money to buy squad cars and other equipment such as shot-spotter cameras. City attorneys claim losing out on the critical funds would cause Chicago irreparable harm in its battle against crime and its effort to build trust in the immigrant communities.

"The mayor and Superintendent Johnson have been very clear from the minute that these conditions were announced by the Trump Justice Department, that we will not stand by and have our values as a welcoming city compromised," Siskel said.

But the Justice Department attorney countered, the grant was so small it would not amount to irreparable harm to Chicago, adding this would not be the first time the Attorney General has added special conditions to grant money.
The judge said he will take this case under advisement, but he did not say when he would issue his ruling.