However, the fact that its civilian component will not be in place for several months sparked more protest at City Hall. Protesters chanted for the council to table the ordinance that the mayor and aldermen had negotiated for months and was finally called for a vote.

"Everybody that's sitting here wants to see a change. If IPRA is broke, how are we going to fix it unless we put something before us?" Ald. Carrie Austin (34th Ward) said.

Since the release of the Laquan McDonald police shooting video, activists have demanded the city replace the Independent Police Review Authority (IPRA) with a new civilian-controlled agency.

The Emanuel administration has proposed a Civilian Office of Police Accountability (COPA) and a new public safety inspector general to be its watchdog.

"Once again, it's what the Mayor wants, or nothing," said Ald. Leslie Hairston (5th Ward).

The faith-based Community Renewal Society called COPA "watered down'' and joined Rainbow PUSH, the NAACP and other social justice groups in protest.

"COPA is simply changing the letters of IPRA," said Sierra Walker, of Community Renewal Society. "This is really a dog and pony show to say that they've presented a solution to the city. But there's no reform or change."

Ironically, the Copa ordinance does not include a civilian component. That troubled the 29th Ward Ald. Chris Taliaferro, one of the eight "no" votes.

"I just don't trust that we're going to put the effort, the diligent effort into making sure that that third prong is there...That civilian component," Ald. Taliaferro said.

But the mayor assured reporters that community voices will be heard and will help form COPA's civilian oversight.

"These are changes we should make and want to make to give people confidence that there's accountability, there's oversight," Emanuel said.

It should be noted that the city's police department is under investigation by the U.S. Department of Justice, so all the related systems the city might put in place are subject to review and changes may be ordered by the feds, if they see fit to do so.
Related topics:
politicslooprahm emanuelchicago city councilpolice brutalitychicago police department
Copyright © 2021 WLS-TV. All Rights Reserved.
RELATED 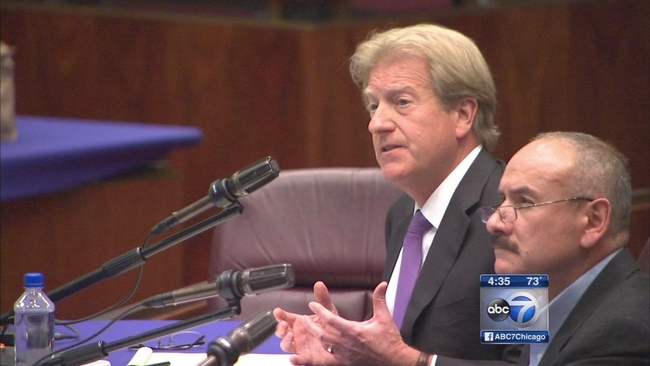