Chicago protest: 'Count Every Vote' group marches through Loop calling on Trump to concede 2020 election; no arrests made 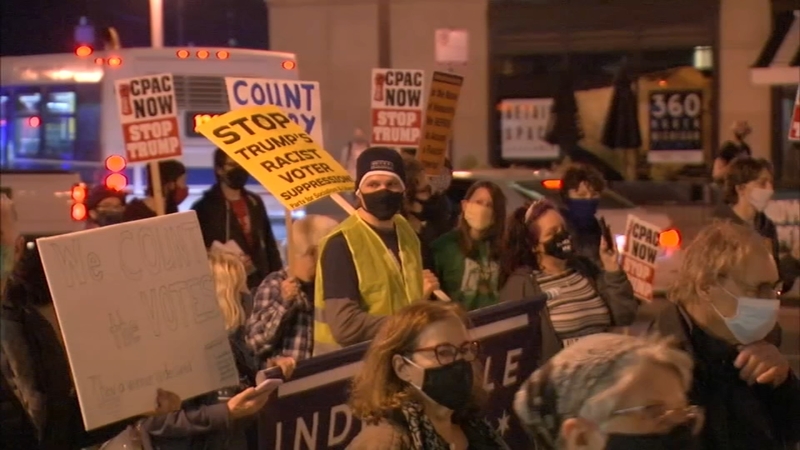 CHICAGO (WLS) -- The fight over the presidential election results sparked a march in downtown Chicago Wednesday night as people demanded all votes be counted.

Hundreds gathered in Chicago's Daley Plaza before marching throughout the Loop, demanding to continue the nationwide ballot count.

The group was seen carrying large banners that read ""Count Every Vote" and "Out Now!" as they marched north on Michigan Avenue.

Demonstrators expressed their unified anger towards President Trump's remarks early Wednesday morning, when he called for all "voting to stop," claiming Democrats would use mail-in ballots to "steal the election."

"This is America and we need to save our democracy," said Andy Sturges. "That's why I'm here."

The city has shut down the Wabash Avenue bridge near Trump Tower for election night "as part of a precautionary measure to ensure the safety of residents."

The bridge over Wabash Avenue was raised again Wednesday evening as protesters marched through the downtown area. Police lined up across other bridges along Wacker Avenue to prevent the group from crossing the Chicago River.

The bridge will be "out of service until further notice as part of a precautionary measure to ensure the safety of residents,' said Mary May, spokeswoman for the Office of Emergency Management and Communications.

The strategy was employed multiple times this summer in attempts to keep the downtown area safe from looting during protests against police brutality and violence.

Chicago police said no arrests were made during the protests Wednesday night.

Meanwhile, from New York to California, thousands of demonstrators turned out, demanding that every vote be counted.

In Manhattan, hundreds of protesters took to the streets, with some setting fires and clashing with police and several people were arrested.

In Portland, Oregon, the governor called out the National Guard after demonstrators engaged in widespread violence downtown, including smashing windows.