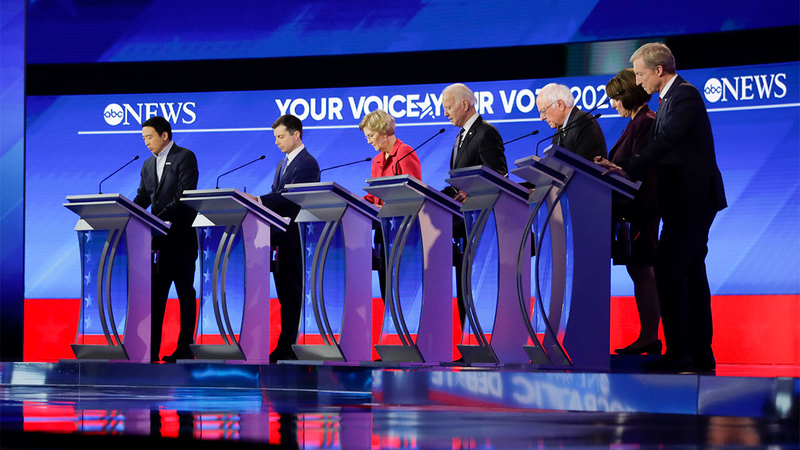 Biden, on the offensive throughout the high-stakes face-off, predicted he would "take a hit" in New Hampshire's next-up primary election after a weak showing in Iowa. But he also raised questions about the longterm viability of leading rival Bernie Sanders, who identifies as a democratic socialist, and Buttigieg, who has never served in elected office beyond the mayor of South Bend, Indiana.

"Bernie's labeled himself, not me, a democratic socialist," Biden said as he acknowledged his own political challenges.

"Turn the page," the 38-year-old Buttigieg said in a jab at the 77-year-old former vice president. "Now, we have to meet this moment."

More than their rivals, the debate tested new front-runners, Sanders and Pete Buttigieg, who emerged from Iowa on top but walked into New Hampshire with liabilities that their Democratic rivals tried to exploit. With the stakes rising by the day and money rapidly drying up, Biden, Elizabeth Warren and Amy Klobuchar were also fighting to prove to voters and donors alike that a legitimate path to the presidency remained.

Klobuchar was among the underdog candidates who took aim at Buttigieg, lashing out at the millennial mayor for saying in his stump speech that the impeachment proceedings were "exhausting" and that he'd rather watch cartoons.

She also accused Buttigieg of attacking Washington "because it's popular to say and makes you look like a cool newcomer."

If elected, Buttigieg would be the youngest president ever elected and he has never served in elected office beyond the mayor's office. But he used experience as a weapon against Biden, a two-term vice president who has spent most of his adult life in Washington.

"I'm interested in the style of the politics we need to put forward to actually finally turn the page," Buttigieg said.

Biden was then on the defensive: "The politics of the past I think were not all that bad," he said. "I don't'know what about the past about Barack Obama and Joe Biden was so bad."

The debate was heated at times, yet there were plenty of moments of unity with candidates aware that Democratic primary voters have little desire to see an all-out intraparty brawl.

Warren avoided any direct criticism of her rivals and repeatedly pivoted to her core anti-corruption message. As Biden, Sanders and Klobuchar fought about the best way forward on health care, Warren did not engage, instead speaking broadly about the need to lower prescription drug costs.

And in between clashes over policy, Biden and Sanders called for party unity against Trump.

When a moderator asked Klobuchar to respond to Hillary Clinton's comments that no one likes Sanders, Biden walked over and gave him a hug. Klobuchar, meanwhile, joked that Sanders is "just fine" and noted times when they had worked together on policy.

Earlier, a somber Biden was appreciative when Buttigieg defended him and his son, Hunter Biden, against attacks from Trump in the impeachment inquiry.

"We're not going to let them change the subject, this is not about Hunter Biden or Vice President Biden or any Biden. This is about an abuse of power by the president," Buttigieg said. "The vice president and I, and all of us, are competing but we've got to draw a line."

Billionaire activist Tom Steyer and New York entrepreneur Andrew Yang, meanwhile, were fighting to prove they belong in the conversation.

Former New York Mayor Mike Bloomberg remains a major unknown in the primary math, skipping debates and the first four states' elections while flooding the airwaves with hundreds of millions of dollars in ads and picking up significant endorsements. He's focusing on the big basket of Super Tuesday primaries.

Traditionally, the knives come out during this phase in the presidential primary process.

It was the pre-New Hampshire debate four years ago on the Republican side when then-New Jersey Gov. Chris Christie devastated Florida Sen. Marco Rubio's presidential ambitions with a well-timed take-down. Rubio never recovered, making it easier for Donald Trump to emerge as his party's presidential nominee.

The stakes were particularly high for Biden, who has played front-runner in virtually every one of the previous seven debates but left Iowa in a distant fourth place. While reporting problems have blunted the impact of the Iowa contest, Biden's weakness rattled supporters who encouraged him to take an aggressive tack Friday night.

Yet Biden was also forced to defend his long record in government as the candidates sparred yet again over the decision nearly two decades ago to send U.S. troops to Iraq.

Biden acknowledged anew that his vote in favor of the war authorization as a senator was a mistake, while Sanders said his Senate vote against deploying troops was proof of his judgment on national security issues. Buttigieg, who was in college at the time and later served in Afghanistan, said he would have opposed the war, too.

The seven-person field also highlighted the evolution of the Democrats' 2020 nomination fight, which began with more than two dozen candidates and has been effectively whittled down to a handful of top-tier contenders.

There are clear dividing lines based on ideology, age and gender. But just one of the candidates on stage, Yang, was an ethnic minority.

As it has before, health care also emerged as a flash point.

Both Biden and Klobuchar said Sanders' support for his signature Medicare for All single-payer health care plan was not realistic.

"I busted my neck getting Obamacare passed, getting every Democratic vote, I know how hard it is," Biden said, after accusing Sanders of obfuscating on how much his plan would cost.

Klobuchar questioned the political feasibility of the plan.