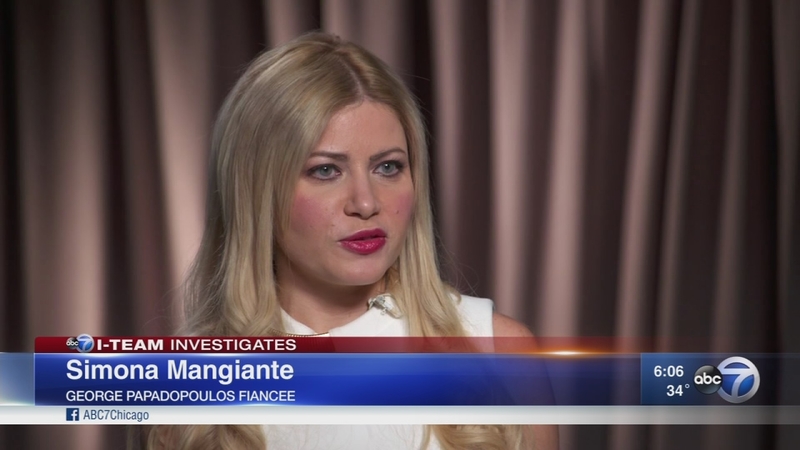 CHICAGO (WLS) -- The local link to a brewing White House scandal is the "first domino in the Russia investigation" according to his fiancee.

The domino is George Papadopoulos, a DePaul and Niles West High School graduate-and the first to plead guilty in the Russia collusion investigation.

Simona Mangiante is an Italian attorney and engaged to marry Papadopoulos.

On Friday she offered his first public defense-going to bat for her fiance; hitting back against White House claims that Papadopoulos was a nobody on the campaign.

What he can't say because he will be a federal witness against those likely to be charged next, now she is saying, in an interview with ABC's Good Morning America.

"He set up meetings with-- leaders all over the world" said Mangiante. "He was constantly in touch with the higher level officials of the campaign, and he never took any initiative as far as I know unauthorized."

He was not just a "coffee boy" as a White House official labeled him in October when his guilty plea was made public.

"There are consistent evidences that he was not a coffee boy...I would love George to learn how to make a coffee, because it's absolutely out of his skills," she joked. "George is a remarkable young man with incredible experience in the field of energy and oil policies. This experience led him to get into the campaign and to advise the president at only 28 years old."

Even President Trump denigrated Papadopoulos when the news broke in October that he was pleading guilty to lying to the FBI about his role in connecting the campaign with the Kremlin. Trump tweeted that he was a "low level volunteer."
Mangiante said that isn't true and that cooperating with the federal investigation proves he is a patriot.

"He is already on the right side of history" she said. "George is very loyal to his country," Mangiante told ABC News Chief Anchor George Stephanopoulos.

Neither Bannon nor an attorney for Flynn commented to her remarks.

How close Chicago's Papadopoulos was to the top echelon of the Trump campaign remains foggy. The White House Press Secretary Sarah Sanders has said his role was "extremely limited" and "a volunteer position," she said in October.

Mangiante herself was questioned by Chicago FBI agents in October, who wanted to know more about her business dealings. She said she was brought to the FBI office in Chicago and asked about her work for a Russia-connected professor in London and about her work as a political aide for the European Parliament in Brussels. There were also questions about her relationship with Papadopoulos, she said.

He hasn't talked publicly since it became evident that he was a cooperating witness.

George Papadopoulos' fiance, Simona Mangiante, decided to speak out on behalf of him after claims from the White House that he was just a ragtag volunteer.