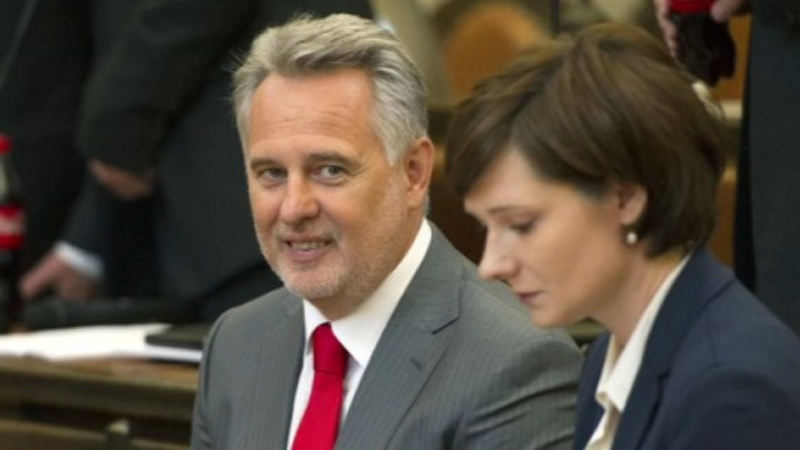 Extradition to Chicago may be imminent for Dmitry Firtash, Ukrainian oligarch and Manafort associate

CHICAGO (WLS) -- Kremlin-connected gas tycoon Dmitry Firtash will have to stand trial on bribery charges in Chicago after a federal judge Saturday afternoon denied his motion to dismiss the controversial case against him.

In a 39-page order, U.S. District Judge Rebecca Pallmeyer ruled that the government may move forward on charges that Firtash and a business partner used American financial institutions in their efforts to bribe public officials in India. The men attempted to rig an Indian titanium mining deal that would supply a company headquartered in Chicago, prosecutors have alleged.

RELATED: Extradition to Chicago may be imminent for Dmitry Firtash, a Ukrainian oligarch and Paul Manafort associate

As the I-Team first reported in 2013, that Chicago company was aerospace giant Boeing, which hasn't been implicated in the criminal case.

The prosecution in Chicago "is not unreasonable" wrote Judge Pallmeyer "and does not violate any of their right to due process granted by the United States Constitution."

"Motions to dismiss before trial are almost never granted. The court ruling here states only that the US prosecutors have jurisdiction to prosecute. It says nothing about guilt or innocence. We remain confident that Mr. Firtash, who is not accused in the indictment of paying any bribes and has never visited or done business in the United States, is innocent of these charges."

Firtash, an oligarch and one of the wealthy-and most powerful- industrialists in Ukraine, has been under what amounts to house arrest in Austria for the past five years. He contends that the U.S. has no cause of action against him and says that he has never even been in Chicago for a visit, much less to be involved in a criminal conspiracy.

While the case is being prosecuted in Chicago, much of the criminal conduct alleged in the racketeering indictment occurred overseas.

In Saturday's ruling, Judge Pallmeyer picked apart Firtash's motion to dismiss, finding that the government has ample legal foundation to proceed against him.

According to Pallmeyer's opinion: "Indictments are generally sufficient so long as they set out the elements, apprise defendants of the nature of the charge, and allow defendants to raise the charge as a bar against further prosecutions for the same offense."

Firtash is represented by former Chicago U.S. Attorney Dan Webb who told the I-Team on Saturday that "This decision has nothing to do with whether he will be extradited. That is up to the Austrian Supreme Court- and that court is scheduled to issue a final decision on extradition on 6/25."

A spokesman for U.S. Attorney John Lausch on Saturday afternoon declined to comment on the judge's order.

Some of the attention this case has received is because of business discussions cited by investigators between Firtash and Paul Manafort, former campaign chairman on the Donald Trump presidential campaign. Manafort is now serving a lengthy prison sentence for financial crimes, unrelated to the Firtash case. Both Manafort and Firtash have deep ties to top politicians in Ukraine and Russia. Firtash attorney Davis told the I-Team on Sunday that "Firtash never had ever had a 'business relationship' with Manafort. "There is none. In fact a proposal for a real estate investment made by Manafort was rejected by Firtash. That is all" said Davis.

Even as the Firtash motions have been playing out in Chicago district court, a separate legal chess game has been underway in Vienna where he has been challenging extradition from Austria.

As the I-Team reported earlier this month, Firtash's attorneys say they expect the Austrian Supreme Court to issue a final extradition ruling on Tuesday and that he could be in Chicago by the 4th of July.

His attorney Dan Webb had been pushing Judge Pallmeyer for a decision on the motion to dismiss, claiming that it would be unfair to extradite Firtash for a case that could go away once he arrived in Chicago.