'If you are human, this is your cause': Massive Chicago march condemns violence on Gaza strip 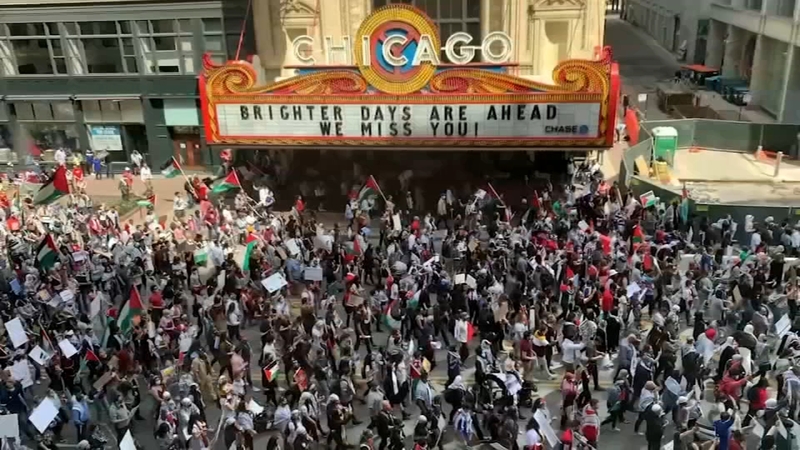 CHICAGO (WLS) -- Two separate groups gathered in the Chicago area Sunday amid the ongoing Israel-Palestine conflict in the Middle East.

A large group of marchers took to the streets of Chicago's Loop Sunday, chanting "Free Palestine."

A large group of marchers took to the streets in Chicago's Loop Sunday, chanting "Free Palestine" amid the ongoing Israel-Palestine conflict.

The massive march is just the latest show of solidarity for Palestinian people in Chicago following the deadliest 24-hours in a week of attacks.

"All Palestinians are my family," said one marcher.

The protest was meant to condemn the recent violence on the Gaza strip.

Waving flags and carrying signs, they called for an end to Israeli occupation of Palestinian territories.

There was also a rally at Michigan Avenue and Ida B. Wells.

Organizers are calling the recent escalation in violence a catastrophe.

"We are here today in solidarity against Israeli aggression, against a defenseless civilian population," said one marcher. "This is not a Muslim issue, this is not a Palestinian issue -- it is a human issue. If you are human, this is your cause."

In the northwest suburbs, protestors also called for a cease-fire.

The group gathered in Buffalo Grove for a "We Stand with Israel" event.

A group gathered Sunday in Buffalo Grove for a "We Stand with Israel" event amid the ongoing Israel-Palestine conflict.

The Consulate General of Israel to the Midwest is keeping a close eye on the situation as the death toll continues to climb.

"More than 3,000 that was shot by Hamas terrorist organization from the Gaza strip into Israel. We have hundreds of thousands of people, including my family [and] my friends [who] were in shelters. Sleeping in shelters, running to shelters. We have civilian casualties," said Daniel Aschheim with the Consulate General of Israel to the Midwest. "The only way to solve this will be here, all together. This small piece of land is negotiating directly with Israel to find a viable solution for all the people who are living in the Middle East."

On Monday, Hamas fired rockets toward Jerusalem that led to the Israeli assault on Gaza.

The continued conflict also drew thousands out in downtown Chicago Wednesday amid the increased tensions. A smaller protest was held in Bridgeview Wednesday night.

Right now, nearly 200 Palestinians have been killed in these airstrikes, including dozens of children and women.

More than 40,000 Palestinians have also been displaced from their homes.

The death, [and] the destruction must end," said U.S. Representative Chuy Garcia. "We have to end the bloodshed and the U.S. must do its part to get a cease-fire."

The United Nations Secretary-General is calling on Israel and Palestine to return to negotiations for a two-state solution to the conflict.