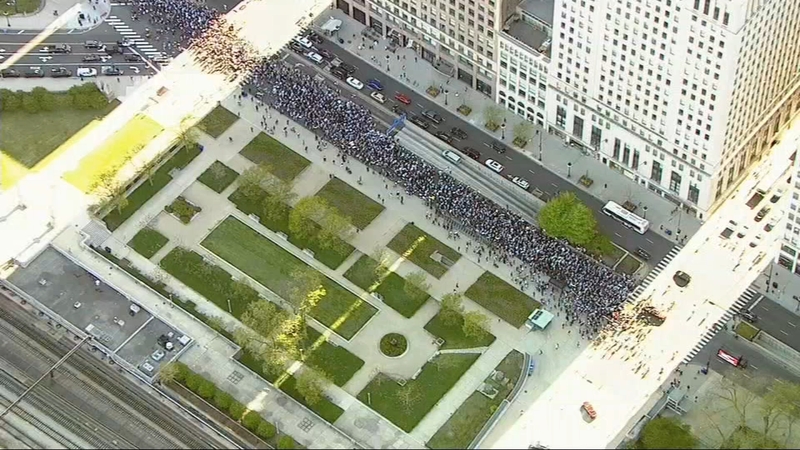 CHICAGO (WLS) -- Thousands of people gathered in downtown Chicago Wednesday afternoon to protest Israeli actions in Jerusalem and airstrikes in Gaza as tensions between Israel and Palestine only increased.

People began to gather around 3 p.m. at the corner of Ida B. Wells and Michigan Avenue, mostly from Bridgeview, which has one of Chicago's largest Palestinian populations. A smaller protest was held in Bridgeview Wednesday night.

Israel on Wednesday pressed ahead with a fierce military offensive in the Gaza Strip, killing as many as 10 senior Hamas military figures and toppling a pair of high-rise towers housing Hamas facilities in a series of airstrikes. The Islamic militant group showed no signs of backing down and fired hundreds of rockets at Israeli cities.

In just three days, this latest round of fighting between the bitter enemies has already begun to resemble - and even exceed - a devastating 50-day war in 2014. Like that previous war, neither side appears to have an exit strategy.

At nightfall, the streets of Gaza City resembled a ghost town as people huddled indoors on the final night of Ramadan. The evening, followed by the Eid al-Fitr holiday, is usually a time of vibrant night life, shopping and crowded restaurants.

"There is nowhere to run. There is nowhere to hide," said Zeyad Khattab, a 44-year-old pharmacist who fled with a dozen other relatives to a family home in central Gaza after bombs pounded his apartment building in Gaza City. "That terror is impossible to describe."

Gaza militants continued to bombard Israel with nonstop rocket fire throughout the day. The attacks brought life to a standstill in southern communities near Gaza, but also reached as far north as the Tel Aviv area, about 70 kilometers (45 miles) to the north, for a second straight day.

In Chicago, residents had different reactions to the escalating violence.

It's particularly painful for Americans with relatives in the places they still call home like Jerusalem, Tel Aviv and points in between.

For Palestinians, the injustices of living, as they see it, under an occupying power inevitably has led to this latest fight.

"Sometimes they are scared at the night time, if the army will come looking for someone," said Muyassar Shalabi, founder of the Palestinian Women's Association of Chicago.

Shalabi's relatives live in the area of the West Bank, a Palestinian territory, that has been taken over by new Israeli settlements. The violence she sees on the news is simply a people's frustration, and she asks Americans to rethink their take on the intractable puzzle of peace in the Middle East.

"They always cover us as the terrorists and we are not," she said. "We are very peaceful people, we are very generous people. We like peace, and we like to live in our country. We like to travel there and spend the summer there, take our kids there and come back. They are not allowed to do that."

"I was visiting my parents' grave site with my wife and all of a sudden we heard what sounded like thunder, but this is the dry season, there's not a cloud in the sky, there is no rain coming," he said. "It is bombs. You do not know where they are going to land."

The rabbi said Palestinian aggression will not promote a better deal for their people.

"Israel has a very strong military, and they don't act unless they are provoked," Prero said. "And the response is going to be what is necessary to shut this down, and if there are a lot of missiles there's going to be a lot of response."

"They took our country. They took our land. And you would be scared the next day they would come and take your house, and who is going to stop them?" said Muyassar.

The UN Security Council is holding a meeting later Wednesday.