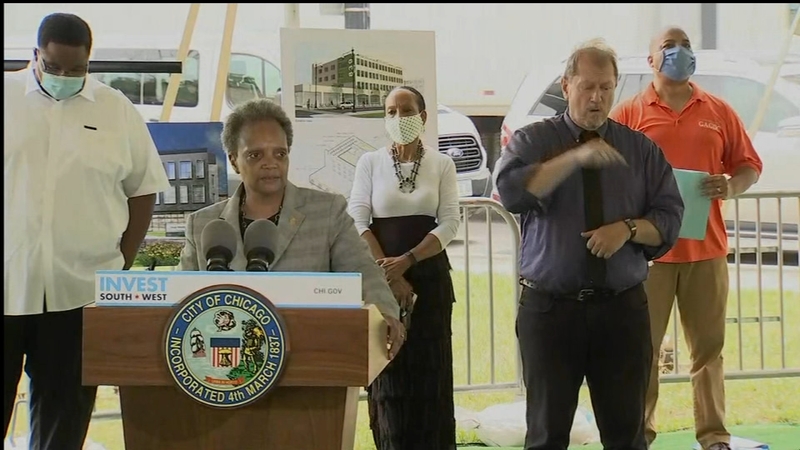 "The last two Mondays I've woken up with an incredible sense of dread, an incredible feeling of despair," Lightfoot said. "Dear God and dear Chicago we have to do better than what we're seeing."

Lightfoot was in the Auburn Gresham neighborhood Monday afternoon where $4 million in federal Cares Act money will go to transforming a shuttered building into a health retail and digital technology center.

But the weekend violence was weighing heavily on her mind after 63 people were shot.

"What causes me the greatest heartache as a mayor, as a mother, just as a human being, human being is seeing our babies being killed," she said.

Lightfoot said there are no easy solutions to the violence but she and others say development will make a difference and offer hope. Another health and retail facility will be going up in the North Lawndale community with $7 million in federal assistance.

Mayor Lori Lightfoot blasted President Donald Trump after he called on her to take action on Chicago's violence.

Lightfoot pushed back against an argument that she should cooperate better with President Donald Trump in addressing gun violence in Chicago.

"This morning the Tribune editorial board urged me to be more collaborative with President Trump. And surely those well meaning people cannot be that naive. President Trump's attention to Chicago is transparently political," Lightfoot said Monday afternoon during a press conference announcing investment in Auburn Gresham and North Lawndale.
Lightfoot referenced a Chicago Tribune editorial from Sunday, "As Chicago's children die, Mayor Lightfoot and Trump spar rather than collaborate."

Last week, Trump sent a letter to Gov. JB Pritzker and Lightfoot asserting that both Democratic politicians prioritized their "own political interests" and called for "law and order."

"If the president wants to make a public show of offering 'to put partisanship aside' to help distressed neighborhoods, then Pritzker and Lightfoot should pursue the offer," the editorial board wrote.

"Here's what I would say to President Trump, that could actually be really helpful in Chicago: First of all... Stop trying to kill off the Affordable Care Act," Lightfoot said. "Millions of people across our country, remain, unable to access affordable, high quality health. Obama Care makes a difference, and is a lifeline. Please, Mr. President. Stop trying to sever it and push for Medicaid expansion in those states that haven't bothered to do it."

"And while we're at it, use federal dollars to actually build affordable housing," she said.
"Stop doing injury and harm to our immigrants and refugee communities. Every individual, every child adds value, all their lives also matter," Lightfoot continued.

Lightfoot also called on the president to stop "demonizing" the LGBT community.

Lightfoot said that the president has repeatedly singled out and been critical of female mayors for their handling of the COVID-19 pandemic.

"What's abundantly clear over this last month in particular. There's some obvious dots to connect, as part of his regular rotation of criticisms. He has started attacking and trying to undermine every big city democratic mayor, especially the women," she said.