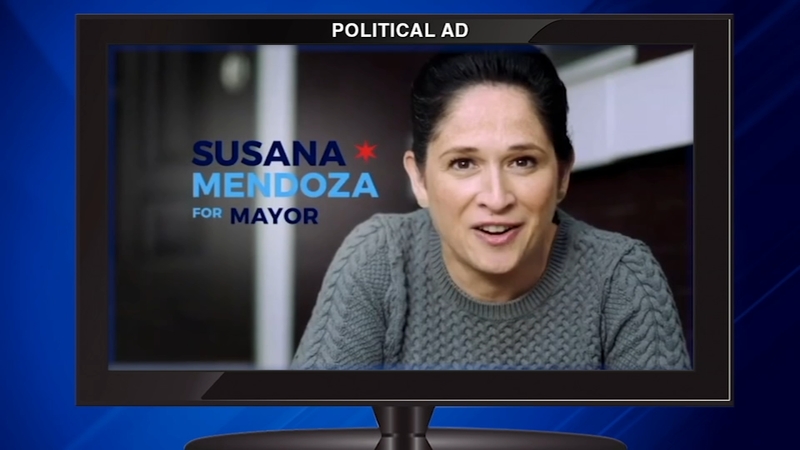 CHICAGO (WLS) -- Illinois Republicans are calling for Comptroller Susana Mendoza to drop her re-election bid after video of a Mendoza for Mayor commercial was leaked.

The leak came four days before the 2018 midterm election. The ad was not supposed to be released.

Mendoza's campaign said she was only preparing for a possible run for Chicago mayor with the video, and the man who made it came to her defense.

"When we were filming Susana for her comptroller reelect, I suggested, because I don't think there's any secret that she'd been thinking about the mayoral race, hadn't made up her mind, that we record some lines," said Eric Adelstein, Mendoza Political Consultant. "If, in fact, she made the decision after the election to run. That we'd have them in the can and could go."

Which begs the question: is there a mole in Mendoza's office?

"I'm not going to speculate on how or why it got out, but it got out, and here we are," Adelstein said.

Mendoza previously released a statement saying, "I'm considering a run for another office and have taken steps to prepare for that should I choose to move forward, but I have not made any formal decision."

Illinois Republicans are calling for Comptroller Susana Mendoza to drop her re-election bid after video of a Mendoza for Mayor commercial was leaked.

Analysts said no one should be surprised.

"The fact that Susana Mendoza is looking at running for mayor is probably the worst-kept secret in Chicago politics," said Laura Washington, ABC 7 Political Analyst.

And Mendoza was even asked about it right before the clip leaked.

"We can talk about the mayor's race after this election's over, but for now I'm fully focused on making sure I get re-elected," she said.

The Illinois Republican Party called Mendoza a liar and claimed she's been misleading the people of Illinois.

"She should immediately drop of the ballot for Comptroller," they said in a statement.

Another member of the Madigan Machine proves they care more about political gain than the people. It's more corruption hurting our state. It's now clear that Susana Mendoza is running for Chicago Mayor and she should drop off the ballot for State Comptroller immediately.

Mendoza is facing Republican Darlene Senger in the election. She also called for her to step down.

"I am asking for Mendoza to drop out of the race, I am asking for the Party leaders, including JB Pritzker and Speaker Madigan to tell her to do the same," Senger said.

Mendoza has hinted she will run for mayor if JB Pritzker wins the Illinois gubernatorial race, but will stay on as Comptroller if Gov. Bruce Rauner is re-elected, in order serve as a check on his power.

Senger has been highly critical of Mendoza for flirting with the idea of running for mayor.

Several candidates who have already thrown their hats into the mayoral race also criticized Mendoza.

Paul Vallas focused on the cost that a special election would require.

"Running for two offices at the same time is disrespectful of voters and the democratic system," he said in a statement. "Special elections are extremely costly and should not be treated as an incidental cost for unbridled ambition. This is pure political bullying of taxpayers."

"This is Chicago's politics as usual. Mendoza is another politician who is looking to enhance her own profile and power while shortchanging the voters," he said.

Meanwhile, Lori Lightfoot said Mendoza would have further explaining to do beyond the release of this video, given her history of endorsing outgoing Mayor Rahm Emanuel's policies.

Amara Enyia reserved judgment, saying, "I'm sure when she makes her decision, she herself will publicly declare what her decision is."