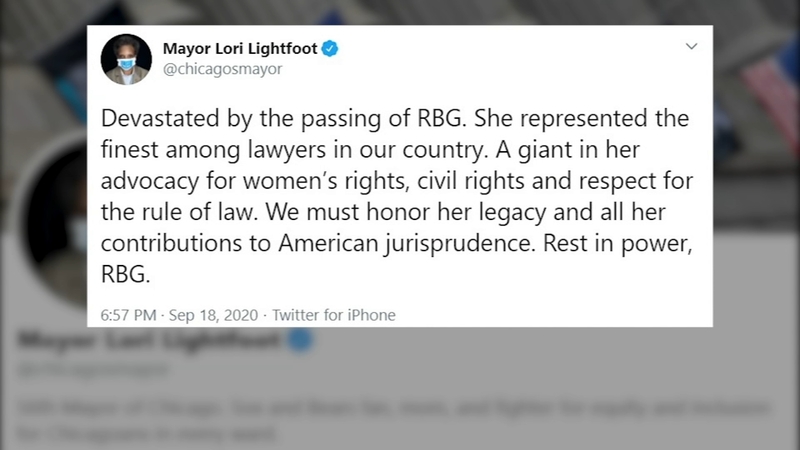 Devastated by the passing of RBG. She represented the finest among lawyers in our country. A giant in her advocacy for women’s rights, civil rights and respect for the rule of law. We must honor her legacy and all her contributions to American jurisprudence. Rest in power, RBG.

"America has lost an icon and inspiration. Justice Ruth Bader Ginsburg was first a trailblazer and then a bulwark for equality, whether you are a woman, gay, a person of color or disabled. Just as importantly, she was a shining role model for girls everywhere - a testament to working hard and fighting for what's right. Her legacy will endure, but only if we fight as hard as she did to protect it. MK and I grieve for Justice Ginsberg's family, friends and followers - but most of all, our entire nation. Our prayer is that we honor this giant by honoring her fervent dying wish."

"Tonight, when I learned of the passing of Ruth Bader Ginsburg, I felt a profound and deep sadness. This feeling is not only for the grief that her loving family must bear, but because of the devastating loss to our nation, and to women everywhere. Ruth Bader Ginsburg possessed a great legal mind and she used it to advocate for the rights of women and to be a voice for the underserved.

"For women, the path to a law degree has extra hurdles. I am sorry to say that sexism is still prevalent in our society where women and men are not equally paid, and little girls are not always told to dream big. But Ruth Bader Ginsburg achieved and dreamed big for herself, and for all women. As a young lawyer, Bader Ginsburg was one of my role models. I admired her intellect, her fearlessness to speak openly about issues, and her tenacity in court. She made it clear that it is the right and duty of every woman to be her best, and to expect equity, and to fight for herself and others, if she does not get it.

"Bader Ginsburg once said, 'Women belong in all places where decisions are being made.' Those words guided me to bring my full self into rooms, and to sit at tables with the clarity that I'm there for a reason and must be boldly and courageously me.

"Now Bader Ginsburg is gone, but her ideals and her example will live on. In her memory, we must fight for justice, equity and inclusion for all women, regardless of race, class or religion. In this 100th anniversary year of the ratification of the 19th Amendment, women should flock to the polls to vote for transparency, integrity, and leadership in the White House. It's the right thing to do. It's the Bader Ginsburg thing to do."

"My thoughts and prayers are with the family and loved ones of Ruth Bader Ginsburg. Our nation has lost a remarkable woman and renowned public servant.

"Justice Ginsburg undoubtedly left her mark on this world and her commitment to the rule of law will inspire generations to come. The second female ever appointed to the Highest Court in the Land, she was a trailblazer who proudly served our country for over 27 years and stood as a role model to many. Justice Ginsburg believed deeply in the freedoms of America and our nation is better for her service.

"May we honor her dedication and love of country."

"There are no words to adequately express just how devastated and heartbroken I am to learn of the passing of Ruth Bader Ginsburg. Not only did our nation lose a brilliant jurist, we lost a hero-a 5'1" giant who gave a voice to girls and women everywhere and moved the needle forward in our long fight toward justice and equality for all.

"Like so, so many other Americans tonight, I am deeply grateful for all that Justice Ginsburg did to ensure equal protection under the law for women across this country and to defend the rights of so many others. She will be sorely missed, but her unparalleled legacy and impact will never be forgotten.

"Tonight we are devastated, but tomorrow we will roll up our sleeves and keep working. We must honor her legacy by redoubling our efforts to safeguard the rights of women, the rights of Americans with disabilities and the rights of all Americans for future generations. We cannot let up now."

"The Supreme Court's most valiant champion for justice in our lifetime is gone. Justice Ginsburg was an American hero.

"Please remember Senate Majority Leader Mitch McConnell's demand that Supreme Court vacancies go unfilled during a presidential election year, which was also Justice Ginsburg's dying wish. Senator McConnell pleaded with us to let the voters have the last word. Every member of the Senate should be asked to commit to the McConnell Rule.

The Supreme Court’s most valiant lady is gone. Rest in peace, Ruth.

"My wife Evelyn and I are heartbroken by the loss of Justice Ruth Bader Ginsberg. A trailblazer for women's rights and gender equality, her brilliance, tenacity, and legacy will continue to inspire us all.

"Justice Ginsburg's last wish was to be replaced after the next President is installed; we must honor her wish and ensure that the People's will is reflected in the upcoming nomination process. Our next Supreme Court Justice must strive to uphold Ginsburg's enduring commitment to equality, opportunity and justice for all.

"It is impossible to put into words the sadness and grief our country feels with the death of Justice Ruth Bader Ginsburg. Justice Ginsburg was a giant for justice and a force that represented the best of our judicial system and our country. I am personally shaken and devastated. Her fierce advocacy for the protection of rights for all people under the law-women, workers, LGBTQ people alike-and her guardianship of the Constitution must not be taken for granted. As a lawyer, she challenged and defined 'equal justice under the law' in a way that changed our country to make it fairer and better. As a Supreme Court justice, she upheld those sacred principles. Her life and work paved a way for women like me to challenge norms and fight for people and causes that make our country stronger.

"Our democracy depends on the American people having a voice by electing a President who will fill this vacancy."

"The passing of Justice Ruth Bader Ginsburg is a devastating loss for the Supreme Court and our country, and my thoughts go to her family during this very difficult time. Americans of all backgrounds benefitted from her fierce commitment to defending the rights enshrined in our Constitution. She was truly a pioneer in the legal world and an American hero.

"Very soon, the principles of personal integrity and fair play on which the Senate has always operated will be tested, as each Senator decides whether to abide by recent precedent that a vacancy on the Court should not be filled before the American people have a chance to make their voices heard in an upcoming presidential election."

"Justice Ruth Bader Ginsburg was a trailblazer and a giant of the Supreme Court who had a tremendous impact on our country. Before we begin the political talk about her replacement, we should remember her life and her legacy. Part of this legacy that is especially important to remember in this
time of ideological vitriol was her friendship with the late conservative Justice Antonin Scalia. The two justices disagreed strongly in their opinions yet maintained a friendship throughout their time on the court. Our nation should learn from these two late justices the way to live together in spite of differing beliefs. My thoughts and prayers are with the Ginsburg family during this difficult time."

"Justice Ginsburg was a jewel for justice, highly principled and held an expansive view of America and the world. She was a champion for equality on every level, including race and gender. She ruled for the common people. We miss her already as we contemplate and review her legal contributions. May she rest in peace. Our prayers are with her family and friends."