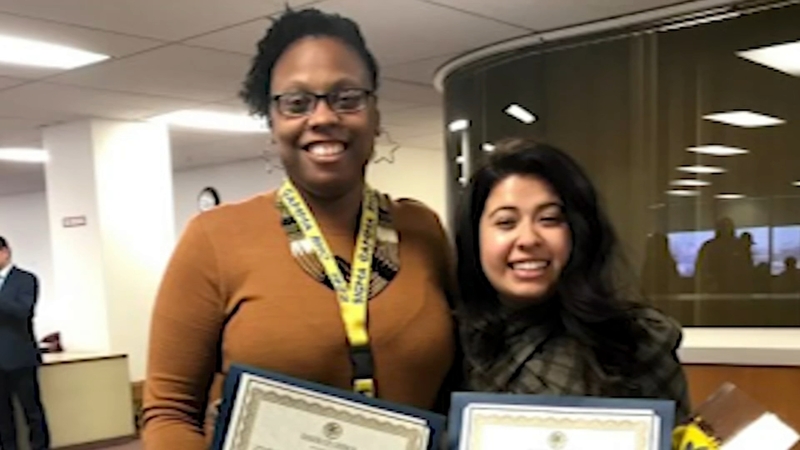 CHICAGO (WLS) -- A 35-year-old pregnant woman was found fatally shot early Tuesday morning in Jeffery Manor on the South Side.

According to Chicago police, around 12:06 a.m. officers responding to a ShotSpotter alert in the 2100-block of East 95th Place, found the woman laying unresponsive on a porch with two gunshot wounds to her back and one on her side.

The woman was eight months pregnant and rushed to the University of Chicago hospital in critical condition, police said. She later died at the hospital.

Doctors were able to deliver her baby, who remains in critical condition at Comer Children's Hospital, police said.

The victim was identified as Stacy Jones of Chicago, the Cook County medical examiner's office and police said. Timothy Evans, chief judge of the Cook County Circuit Clerk, confirmed Jones had worked as a probation officer in the court's Adult Probation Department since April 2019.

Neighbors said Jones, who is originally from Tennessee, had lived at the address of the shooting for less than a year. They last saw Jones playing outside with her other two young children Saturday.
"Me and her little son, her little boy. We were outside raking leaves. Saturday. That was the last time I saw them," said Jones.

"I just saw her Friday, and she was telling me how happy she was that she was about to have a baby," said Minor. "Stacy was a very perky person, you know, always had a smile every morning coming to work. Every day, every time I saw her she'd say, 'Hi Nick!'"

Minor said her job was her passion, but Stacy's pride was her children. He said her murder not only stole her future, but robbed her boys of a loving mother.

"I just really hope that this case gives the justice that it deserves, because the world is missing a fantastic person," he said.

Tracy Hancock, who lives nearby lost a niece to gun violence in a nearby park in 2012. She was also a mother of four at the time.

"She left four kids that we had to raise, and they're still traumatized," she said. "This touched me really bad. In my heat, in my stomach. I couldn't go back to sleep. I heard it at 6 o'clock in this morning. I'm praying for the baby, that the baby comes through."

Area Two detectives are investigating the shooting. They said police found racially tinged graffiti on the side of Jones' apartment, but believe it was placed there as a diversion.