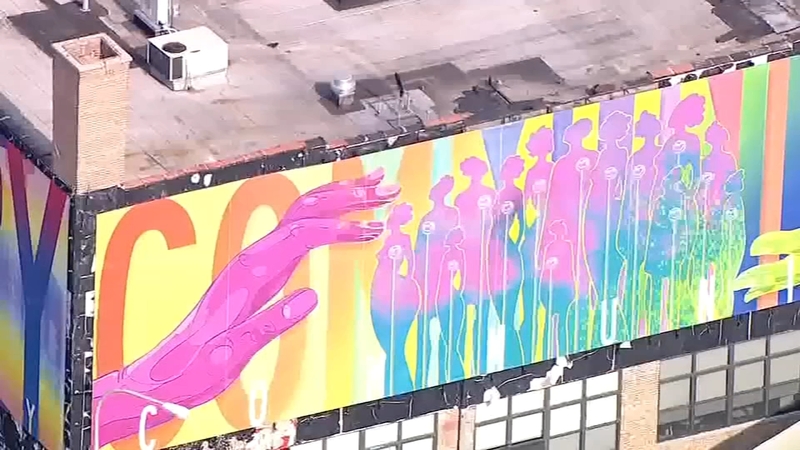 CHICAGO (WLS) -- Just northwest of downtown along the Kennedy Expressway near Ashland, drivers and their passengers are taking notice of a Pride Month mural on the Wintrust building.

The mural is a part of an ongoing series by Wintrust where the bank partners with local non-profits to make a statement with art.

"LGBTQ really spans a broad spectrum," said David Ernesto Munar, Howard Brown Health president and CEO. "We wanted to celebrate all that diversity in an inclusive piece of artwork."

For Geary, the mural was about bringing awareness to the experiences and existence of the LGBTQ+ community.

"There are conversations about like, 'Is the world becoming a little gayer?' And I'm like, hmm, no, I don't think it's actually anymore than it used to be," Geary said. "It's just people don't harbor shame."

The mural, which is on three sides of the building, highlights the intergenerational relationships in the LGBTQ+ community. Each side has a theme: pride, community and history.

Geary said the colors are inspired by the pride and progress pride flags.

"That visibility, that representation is the only way we get to something being normative," he said.

Geary, who identifies as queer, said this is his first piece of work focused on the LGBTQ+ community.

"It opens the door for me to really through my work talk about another thing that is important to me," he said.

One part of this mural is deeply personal for Geary. His paternal grandmother is the only real-life person featured in the mural. Geary said she wasn't able to openly embrace being a lesbian during her lifetime.

"You do that thought experiment of if they had that freedom, who would they have been," he said.