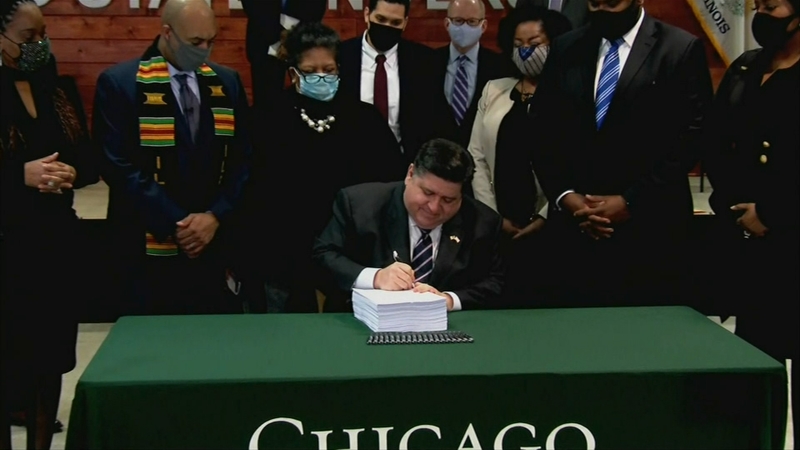 Pritzker signed House Bill 3653, also known as the Police and Criminal Justice Reform Bill, at Chicago State University on the South Side.

"This bill was infused with the power of individuals most directly impacted, survivors of domestic violence, survivors of crime and those who have been detained pre-trial only because they are poor. We are a stronger state when we lift up these voices," Governor Pritzker said.

The comprehensive reform package was pushed by the Legislative Black Caucus after the death of George Floyd and other cases of police misconduct.

One of the key components of the bill is the elimination of cash bail by 2023, which supporters say unfairly locks up poor people awaiting trial because they can't afford bail, while the wealthy can bond out.

But critics say the way the bill is written could put dangerous criminals back on the street by limiting judges' discretion on detaining them.

"It's going to be a catch and release system; when police do catch someone, it's going to be impossible to detain the most violent criminals," said State Senator John Curran (R-Downers Grove).

Supporters say getting rid of cash bail doesn't mean everyone goes free while awaiting trial. Judges make that call based on the threat a defendant poses.

"What we've done is strengthen judicial discretion when it comes to determining whether someone is a threat to a person or community," said Sen. Peters. "We focused this explicitly and narrowed it so money does not play a factor. Money does not determine whether someone's a threat."

The law also all requires police officers to wear body cameras by 2025, and would also restrict officers' ability to pursue fleeing suspects.

"In the wake of the last summer's protests against police violence and the responses to the release of the video showing the humiliation and harassment of Anjanette Young, there is little doubt about the strong support for additional police accountability and criminal justice reform," said Khadine Bennett, director of advocacy and intergovernmental affairs at the ACLU of Illinois in a statement.

Under the new law, officers will be prohibited from using chokeholds, and it allows people to file anonymous complaints against the police.

Supporters said in the wake of Floyd's murder and other cases of police brutality there was a wakeup call about the need for reform.

"This legislation being signed today does go a long way toward calling an end to such tolerance and begin to put a system of accountability and professionalism forth, and hopefully begin to rebuild the trust in law enforcement," said Illinois Attorney General Kwame Raoul.

Some Illinois police chiefs say punitive language in the bill makes it difficult for officers to do their jobs.

Most police organizations opposed the bill, calling it the "anti-police bill."

"There's already rumblings that people are taking a look at getting out of the profession," said Ed Wojcicki, executive director of the Illinois Association of Chiefs of Police.

While the bill requires body cameras, it does not allow officers to review their own footage before writing a report, which critics say puts them in an impossible position.

"Now the officer is guilty of misconduct because he left out information that was on the body camera, but it wasn't in the report. According to this bill, he is guilty of a Class 3 felony," said Indian Head Park Police Chief Steven Stelter.

Stelter and other police chiefs say punitive language in the bill makes it difficult for officers to do their jobs.

"It's unfortunate," said Oak Brook Police Chief James Kruger. "All we needed to do was have the opportunity to explain why something may or may not work, without affecting the spirit of what they were trying to accomplish.

Kruger said Illinois chiefs support reform, but were not included in crafting the bill. One provision in the law prevents officers from tasing someone in the back, but police said they are trained to use the back because it is the safest part of the body.

"Now you are forcing an officer to only tase someone in the front of their body and who knows, in the heat of the moment they may tase somebody in places they are not supposed to; in the groin, head, neck," Stelter said.

Stelter said he predicts the new bill will result in more crime, with officer early retirements and younger officers joining departments in other states. The Illinois Chiefs of Police is hoping to work with the sponsors of the new law to tweak some of the language to address some of their concerns.