WLS
By Mark Rivera
BOLINGBROOK, Ill. (WLS) -- Bolingbrook police are investigating an attack on a suburban Muslim family as a hate crime after someone sprayed hateful graffiti on their home.

"I was frozen, I started screaming. My parents came rushing downstairs, and they saw the brick, the turned the lights on and then they went outside to see all the hateful graffiti," said Aamir Khan.

He recounted the moment when a brick was hurled through his bedroom window early Saturday morning. The Khan family is still in shock after their home was covered in racial epithets, swastikas, homophobic and anti-Muslim graffiti.

"No one should never have to live in fear simply for being who they are," Khan said. "The person who threw the brick in my window and tagged the front of my family home with hateful graffiti in the middle of the night is a coward, bully, and a menace to society."

Bolingbrook police are now investigating this as a hate crime, however, no one is in custody.

Khan, 21, is one of six siblings that live at the home. The youngest is just 2 years old. He's frightened for them.

"There's little kids in the house and they could have gotten hurt and we just need this person to get caught," he said.

At the Council on American Islamic Relations, there was outrage and frustration over the attack that CAIR Chicago executive director Ahmed Rehab said affects more than just one Muslim family.

"But also anybody who is Arab or is black, or is gay or is a woman. This was misogynistic, homophobic, racist, Islamaphobic, as well as violent," Rehab said.

Khan's neighbors are just frightened. They're asking why someone would do this in their community.

"Nobody deserves that, man... I don't understand why would somebody throw a brick through their window. It's senseless," said neighbor Sean Smith.

Now, the vulgar, racist messages are painted over, washed off as best as possible from the sidewalk, a wooden plank over the broken window. But this family is still waiting for the peace of mind that was ripped away.

"We just didn't think anything like this would ever happen," Khan said.

Bolingbrook police say they are still following up on leads and consulting with the Will County State's Attorney on potential charges.
Report a correction or typo
Related topics:
bolingbrookmuslimsgraffitivandalismracism
Copyright © 2020 WLS-TV. All Rights Reserved.
RELATED 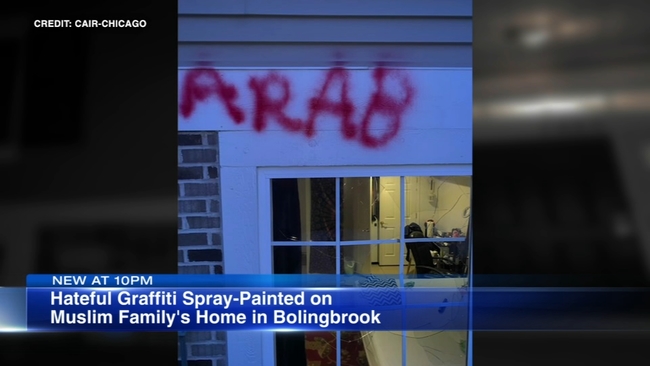