Rosemont red light camera rakes in millions of dollars; some drivers say it's a trap 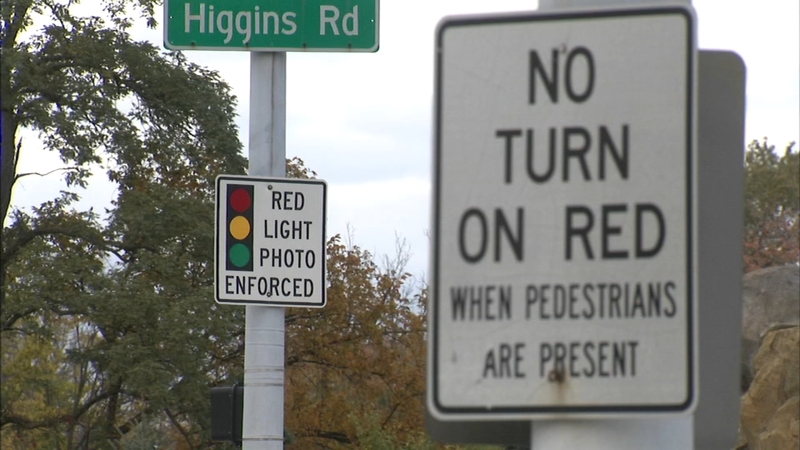 ROSEMONT, Ill. (WLS) -- The red light camera at a designated right turn lane in Rosemont has raked in millions of dollars. Critics and motorists said it's a trick to make drivers turn right on red without stopping.

The busy intersection in the heart of Rosemont is near the convention center, popular restaurants, hotels and a casino.

"Are you really giving people tickets on technicalities, or are you trying to put things in place to protect safety?" asked ticketed driver Scott Albrecht.

He and others are fuming over one camera facing a right turn lane, going northbound at the intersection of River and Higgins roads. Critics say it's confusing and call it a red light camera trap for two reasons.

First, they question the "No turn on red when pedestrians are present" sign in the right turn lane.

Drivers like Edgar Londono told Investigative Reporter Jason Knowles, they think they can keep on going if there are no pedestrians.

"Which there wasn't, so I keep going," said Londono.

Londono contested his ticket in the Rosemont red light camera court. So did Albercht. Both lost for rolling through the red light.

"I don't see any signs saying you can't go, there's no pedestrians, no nothing, so I went," explained Albrecht.

Second, drivers say the designated right turn acts as its own lane and tricks them into thinking they can keep on going.

"We don't want to cheat anybody, we are not here to do a 'gotcha moment' on anybody," he said. "The signs are posted in several locations stating, 'red light camera enforced area'."

There is a traffic signal to the left on the island but when you inch up the curve to look for traffic before going right, there's no signal on the right, in the drivers "cone of vision."

Safety expert Timothy Galarnyk has studied the national rules and standards for traffic lights at intersections. He told the I-Team, "There is no signal to control to move the dedicated movement of the turn lane - period. I call it a Rosemont deceptive trap, because they hoodwink the judges and the motorists. Because the judges are relying upon the municipality of doing the lawful thing by placing traffic devices."

"I believe if that was the case the state would not allow that camera to be placed there and us to enforce that," he said.

Asked if the state could be wrong, Stephens replied, "We could all be wrong."

The Illinois Department of Transportation explained to the I-Team that it does not physically place cameras; law enforcement does that. IDOT said it only makes sure cameras are positioned in a way that does not interfere with traffic controls or obstruct traffic lanes and sidewalks.

Mark Wallace from Citizens to Abolish Red Light Cameras believes the curve is much like the other designated right turn lanes which the I-Team has investigated.

"There is no traffic signal in my cone of vision, which is the problem with these right turns, in the suburbs," Wallace explained.

In 2017, several industry experts told I-Team the majority of tickets come from right-on-red turns. Rosemont officials say they can't narrow down how many tickets come from right turns here. However, this one camera, which can ticket drivers going right, left and straight, generated almost $2.5 million in tickets in the last three years, which goes into Rosemont's general fund.

Knowles asked Stephens if that right turn lane is a trap.

"No it's not a trap. I don't believe it's at trap," he replied. "Again, if it was a trap the state wouldn't allow that camera to be there."

Stephens cited what he calls a "48 percent" reduction in crashes at the intersection and says all alleged video offenses are reviewed by a public safety employee before a ticket issued.

"We are not trying to trick anybody," Stephens said. "That is the last thing we want to do. We want to be fair."

He added that the curve in question will be reviewed.

"The turn is under review. Whatever the right thing is to do, we are going to do it," he said.

A change could mean less revenue for Rosemont but Stephens says he's okay with that.

"I am not in this business to make money. Period," said Stephens.

There is also another camera at that same intersection. If you add up the numbers for both cameras, drivers were issued $4.2 million in tickets, in the last three years.

FULL STATEMENT FROM THE ILLINOIS DEPARTMENT OF TRANSPORTATION

The Illinois Department of Transportation (IDOT) follows Federal Highway Administration's Manual on Uniform Traffic Control Devices (MUTCD) in the application of traffic control devices such as traffic signals. The existing traffic signal at IL 72 and Des Plaines River Road was constructed in 1989 and met applicable Federal and State standards in place at that time.

The traffic signal display located in the corner island and the 2 traffic signal displays located overhead on the far side of the intersection control the 2 northbound Des Plaines River Road through lanes and the 1 shared use lane. The northbound through movement is the major movement at the intersection and the through traffic signal displays meet the requirement of MUTCD, Section 4D.13 Lateral Positioning of Signal Faces ("cone of vision"). The southeast corner island is used to create positive driver guidance, to help moderate vehicle turning speeds, provide a pedestrian and bicyclist refuge area, and to allow for placement and optimal visibility of signs and signalized traffic control devices.

RLR locations are submitted by the local municipality and must meet certain criteria and must obtain a permit from IDOT for the installation on state routes.

As far as your question regarding placement, as we have previously indicated, IDOT does not place the cameras since they are an enforcement tool for local police. Our role is to ensure that how they are positioned does not interfere with traffic control, impede traffic lanes, sidewalks or bike lanes, etc. The camera company and/or the local municipality determines the placement.
Report a correction or typo
Related topics:
automotiverosemonti teamconsumerred light cameras
Copyright © 2021 WLS-TV. All Rights Reserved.
I-TEAM
Chicago police have toolkit to prevent repeat chaos in the park
Consumer alert: How to spot a knock-off
What are your holiday flight rights if plans change?
Chicago police to beef up staffing after weekend violence
TOP STORIES
AL police investigating death of former NFL player, Chicago native
Gunmen on jet skis open fire into the air at beach near Cancun hotel
Man killed outside Chinatown school ID'd
Lake Geneva Ice Castles' construction begins in Wisconsin
Chicago police have toolkit to prevent repeat chaos in the park
Jussie Smollett charges to be considered by jury as trial wraps up
Scott Peterson resentenced to life in prison for wife's murder
Show More
IL reports 6,658 new COVID cases, 14 deaths
Michael Strahan's Blue Origin space flight pushed to Saturday
Tiger Woods to make return from car crash at PNC Championship
Omicron detected in Chicago as IL COVID hospitalizations surge
Blackhawks' Khaira responsive after being stretchered off
More TOP STORIES News