CHICAGO (WLS) -- Are there red light camera traps in Chicago? The ABC 7 I-Team found intersections in which some drivers and critics said hundreds of thousands of dollars in tickets were unfairly racked up. One of those intersections made more than $1 million this year alone.

"We believe it improves traffic safety which in the end saves injuries and saves lives," said Kevin O'Malley, managing deputy commissioner of the Chicago Department of Transportation.

But after getting a tip from the group Citizens to Abolish Red Light Cameras (CARLC), the I-Team timed lights at three intersections that have red light cameras.

"The question is why is a green light shorter where the red light camera is at the very same intersection," says Mark Wallace of CARLC.

The green lights are shorter at these intersections in directions where cameras are present.

"It seems like they're definitely trying to get people out here," said driver Michael Potts.

At the first intersection at Garfield Blvd. and Wentworth Ave.in Fuller Park, the two directions which have cameras time to about 30 seconds for the green and yellow lights combined. Drivers get 17 more seconds in the direction without a camera, 47 seconds for green and yellow combined. Cameras at the intersection have made $800,000 so far in 2019.

"That's really significant and you can just generate a lot more violations by having a shorter green on a red light," said Wallace.

City records show that the intersection at 87th and Lafayette in Chatham made more than $1 million this year. The green light time differences are also greater. In the two directions with cameras, green lights are 20 seconds and 29 seconds, respectively. The direction without a camera timed at 1 minute and 9 seconds. That's an increase of up to 49 seconds longer.

"It is all based on traffic flow it is not based on red light cameras," O'Malley said.

But is 20 seconds for the green light enough time?

"It should be enough time, for the traffic flow that is there at the time," replied O'Malley.

O'Malley said lights are different times based on traffic patterns, and that only two directions per intersection are usually chosen for cameras based on their "history of known traffic crashes."

CDOT said there is a further explanation for why directions with longer green lights were not chosen for cameras at the three intersections the I-Team examined.

"These three intersections you've pointed out are off the Dan Ryan, and they happen to be parallel to the Dan Ryan, and one of the directions is on a bridge that goes over the expressway, and we don't install cameras on bridges because of the constructability," O'Malley said. "It's more difficult, as well as the a little shake, so the enforcement is a little more difficult."

The I-Team also examined the intersection at 79th and State in Burbank, which made almost $800,000 this year. The two directions with cameras have green lights that are as short as 22 seconds. The direction without a camera times to 46 seconds.

"It's actually, it's kind of despicable," said Timothy Galarnyk, a traffic safety expert with Construction Risk Management, Inc. He reviewed all three intersections the I-Team examined.

Galarnyk has thoroughly studied the national standards for traffic control devices and lights at intersections.

"I think green lights should be timed based on safety as well as traffic flow," he said.

Galarnyk maintains the disparity of green light times should not be "as great," particularly when cameras are involved.

The I-Team also found that those three intersections in question are in the city's top 10 intersections for red light camera revenue. They rank in fifth, sixth and seventh place. 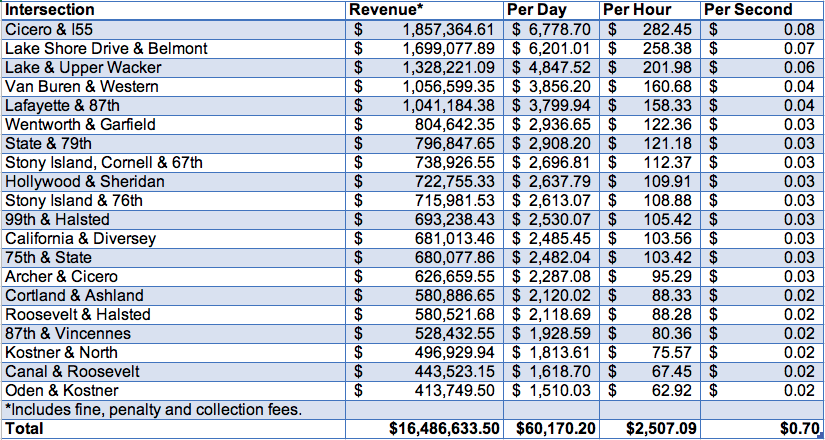 "Would you like to make 8 cents a second?" Knowles asked O'Malley.

"I think we all would, but I would like our streets to be safe and no one to get hurt on our streets as well," O'Malley replied. "In fact studies across the country and here in Chicago, in fact, we commissioned Northwestern University to do a study on red light cameras and they discovered they decrease crashes significantly."

However other studies suggest that nationwide injuries and accidents have not been reduced by red light cameras. Continued revenue also shows that cameras are not stopping alleged violators. Several states have banned red light cameras because of the controversy surrounding them, Texas being the latest.