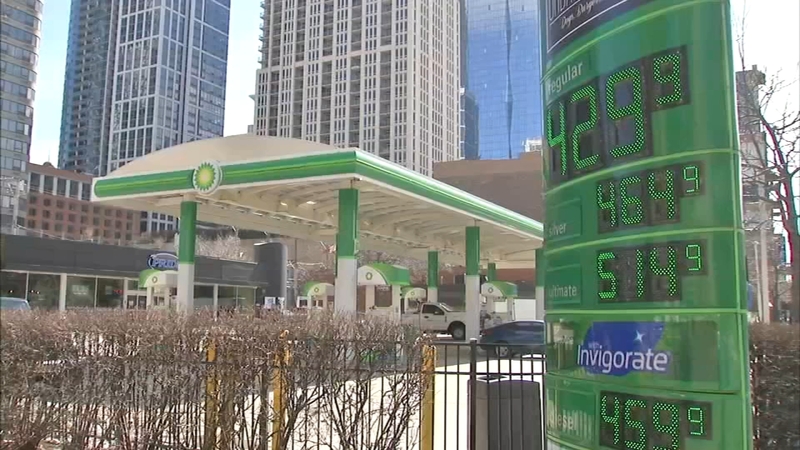 Americans feel effects of Russia-Ukraine situation at the pump

CHICAGO (WLS) -- The Russia-Ukraine crisis has already helped lift oil and gasoline prices to levels unseen since 2014. Further sanctions on Moscow could drive pump prices closer to $4 a gallon.

In Chicago, a South Loop gas station charged $4.30 for a gallon of regular unleaded. In the city as a whole, the average is now $3.90 and rising, according to AAA.

"They are insane, but what do you do? I have to get gas. It's not a happy thing. I don't enjoy it. But i need gas," said Bonita France, motorist.

President Joe Biden, facing the risk of a destabilizing energy price shock, is promising to blunt the impact of rising energy prices on American families. But that won't be easy.

Biden is bracing the public for just that, acknowledging on Tuesday that "defending freedom will have costs."

"I want to limit the pain the American people are feeling at the gas pump. This is critical to me," Biden said during prepared remarks.

Experts say uncertainty about how long the Ukraine-Russia crisis will last and how bad it will get is making the oil markets nervous.

"The problem is how Russia could react to some of the sanctions they are being hit with," said Patrick DeHaan of Gas Buddy. "Russia could use oil as a weapon. They could threaten to cut off oil exports which could drive up the price dramatically."

There's a long history of voters blaming presidents for high gas prices -- fair or not. Yet presidents have limited power to drive down energy prices, as Biden himself has learned painfully in recent months.

Russia is the world's second-largest oil producer and exporter of crude oil, with 5 million barrels per day getting sent overseas. That's roughly 12% of the global crude trade, according to the International Energy Agency.

Any disruption to Russia's oil flows would "easily" drive up crude prices to $120 a barrel, JPMorgan recently warned. Brent, the world benchmark, surged to $99.50 a barrel on Tuesday before backing off.

But it's not just oil. Not only is Russia the world's second largest oil producer. They are also one of the leading exporters of wheat and metals like iron and steel.

"You don't necessarily think about, even your cell phone has probably materials that were sourced from potentially a mine in Russia," said Dr. Maciek Nowak, Dean Quinlan School of Business at Loyola University.

Ultimately, some believe that unless there is a dramatic escalation of hostilities, any impact felt here, whether at the grocery store or elsewhere, will be minimal, because the United States, unlike Europe, does not directly rely on Russian exports.

Oil and gas prices may be the exception to that, as those could go up quite dramatically if all of a sudden Russia cuts off their supply to Europe. But even then, the key, according to most experts is how long this drags on for